Workers with Disabilities More Often Injured than Those without 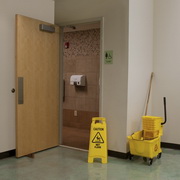 Improving the safety of the working
environment is important for all;
© Martin Haas/panthermedia.net

A new study conducted by researchers at the Center for Injury Research and Policy of The Research Institute at Nationwide Children's Hospital and The Ohio State University compared medically attended noncccupational and occupational injuries among U.S. workers with and without disabilities.

"The increase in occupational injuries to workers with disabilities found in our study shows the need for better accommodation and safety programs in the workplace and the need for a safer working environment," said the study's co-author Huiyun Xiang, Principal Investigator in the Center for Injury Research and Policy and an Associate Professor of the Division of Epidemiology at The Ohio State University College of Public Health. "Outreach programs that teach U.S. workers with disabilities occupational safety and health skills could play a significant role in preventing injuries."

Regardless of the disability status, falls and transportation were the two leading mechanisms of both occupational and nonoccupational injuries among U.S. workers. Thus, improving the safety of the working environment will help to not only reduce the occurrence of fall- and transportation-related injuries among workers with disabilities, but will also benefit those without disabilities.

Data for this study were obtained from the 2006-2010 National Health Interview Survey (NHIS) which used computer-assisted personal interviews to collect data about medically treated injuries that occurred during the three months prior to the interview.


- More about the Nationwide Children's Hospital at: www.nationwidechildrens.org