Working Towards a Better Hearing Aid 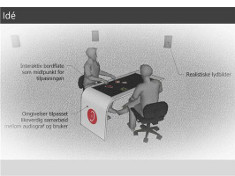 The idea is to develop a sound room with
a work table whose surface consists
of a touch-sensitive display; © SINTEF

Twenty per cent of hearing aid users in Norway use the equipment for only an hour each day. The reason is often poor fitting and inadequate support. Now all this could change.

When a person with hearing impairment is to be provided with a hearing aid, this usually takes place with the help of an audiographer, who adapts the hearing aid using a computer application, based on oral feedback from the user, who in all other respects is not actively involved in the process. The hearing aid user is thus assumed to have poor understanding of his or her own hearing loss and little sense of ownership.

In the spring of 2012 SINTEF carried out a pilot study financed by the Research Council of Norway. This study indicated a need for more two-way co-operation between the user and the audiographer, with better communication providing the user with a deeper understanding of his or her situation and available options.

There is also a need to use sound pictures which are better tailored to the user and which can provide more accurate adaptation.

The outcome was a concept for a new collaborative model in which the user and audiographer are more equal partners, with the user participating to a far higher degree in ascertaining the problem, choosing a solution and fitting the hearing aid.

“Our idea is to develop a sound room with a work table whose surface consists of a touch-sensitive display. Such a work surface can enhance the interaction between the two persons involved, and by demonstrating models and solutions and simulating different sound pictures, the user will also be given a sense of control,” says Geir Kjetil Hanssen at SINTEF ICT.

The research scientists have had discussions both with specialists and with users, and are certain that they are going in the right direction. Using sound simulations, a farmer can test his hearing aid in the presence of tractor noise, while a teacher can try the apparatus among the sounds of a classroom. Thus both will be able to have their hearing aids adjusted to suit a realistic sound environment.

“The table itself is standard equipment,” says Hanssen, “It’s almost as simple as putting legs on a flat screen. The real job is the development of the software.”

The development of the concept now calls for more detailed interaction with the end-users, represented by the Norwegian Association for the Hearing Impaired (HLF).


- More about SINTEF at: www.sintef.no