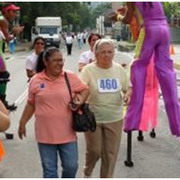 They will be asking if you recognise the face of dementia while paying tribute to those who represent the 'Faces of dementia' in all parts of the world and working tirelessly to promote increased support and care for people with dementia and their careers.

Every year on 21 September Alzheimer associations across the globe unite to recognise World Alzheimer's Day and 2011 will be no exception with events taking place internationally. We are confident that the large numbers of people involved and the media coverage these events will gain can make a real difference for people with dementia, their families and carers worldwide.

The World Alzheimer Report 2011 shows that there are interventions that are effective in the early stages of dementia, some of which may be more effective when started earlier, and that there is a strong economic argument in favour of earlier diagnosis and timely intervention.

• Dementia diagnosis provides access to a pathway of evidence-based treatment, care and support across the disease course.
• Perhaps as many as 28 million of the world’s 36 million people with dementia have yet to receive a diagnosis, and therefore do not have access to treatment, information, and care.
• The impact of a dementia diagnosis depends greatly upon how it is made and imparted.
• Evidence suggests that when people with dementia and their families are well prepared and supported, initial feelings of shock, anger and grief are balanced by a sense of reassurance and empowerment.
• Earlier diagnosis allows people with dementia to plan ahead while they still have the capacity to make important decisions about their future care. In addition, they and their families can receive timely practical information, advice and support. Only through receiving a diagnosis can they get access to available drug and non-drug therapies that may improve their cognition and enhance their quality of life. And, they can, if they choose, participate in research for the benefit of future generations.
• Most people with early stage dementia would wish to be told of their diagnosis.


- More about the Alzheimer's Disease International at: www.alz.co.uk