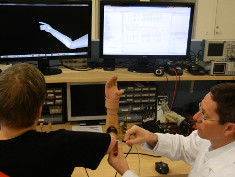 Prosthesis functionality is tested by the patient and Richard Brånemark;
© Chalmers

For the first time an operation has been conducted, at Sahlgrenska University Hospital, where electrodes have been permanently implanted in nerves and muscles of an amputee to directly control an arm prosthesis. The result allows natural control of an advanced robotic prosthesis, similarly to the motions of a natural limb.

“The new technology is a major breakthrough that has many advantages over current technology, which provides very limited functionality to patients with missing limbs,” says Rickard Brånemark.
There have been two major issues on the advancement of robotic prostheses: 1) how to firmly attach an artificial limb to the human body; 2) how to intuitively and efficiently control the prosthesis in order to be truly useful and regain lost functionality. “This technology solves both these problems by combining a bone anchored prosthesis with implanted electrodes,” said Rickard Brånemark, who along with his team has developed a pioneering implant system called Opra, Osseointegrated Prostheses for the Rehabilitation of Amputees.

A titanium screw, so-called osseointegrated implant, is used to anchor the prosthesis directly to the stump, which provides many advantages over a traditionally used socket prosthesis. “It allows complete degree of motion for the patient, fewer skin related problems and a more natural feeling that the prosthesis is part of the body. Overall, it brings better quality of life to people who are amputees,” says Rickard Brånemark.

Presently, robotic prostheses rely on electrodes over the skin to pick up the muscles electrical activity to drive few actions by the prosthesis. The problem with this approach is that normally only two functions are regained out of the tens of different movements an able-body is capable of. By using implanted electrodes, more signals can be retrieved, and therefore control of more movements is possible. Furthermore, it is also possible to provide the patient with natural perception, or “feeling”, through neural stimulation.

“We believe that implanted electrodes, together with a long-term stable human-machine interface provided by the osseointegrated implant, is a breakthrough that will pave the way for a new era in limb replacement,” says Rickard Brånemark. The first patient has recently been treated with this technology, and the first tests gave excellent results. The patient, a previous user of a robotic hand, reported major difficulties in operating that device in cold and hot environments and interference from shoulder muscles. These issues have now disappeared, thanks to the new system, and the patient has now reported that almost no effort is required to generate control signals. Moreover, tests have shown that more movements may be performed in a coordinated way, and that several movements can be performed simultaneously.

“The next step will be to test electrical stimulation of nerves to see if the patient can sense environmental stimuli, that is, get an artificial sensation. The ultimate goal is to make a more natural way to replace a lost limb, to improve the quality of life for people with amputations,” says Rickard Brånemark.

More about the Chalmers University of Technology at: www.chalmers.se