Yoga Can Enhance Coping and Quality of Life for Caregivers 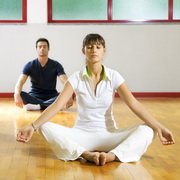 Yoga has positive effects on quality
of life for caregivers; © Diego
Cervo/panthermedia.net

While care for the caregivers is difficult to find, a new study out of UCLA suggests that using yoga to engage in very brief, simple daily meditation can lead to improved cognitive functioning and lower levels of depression for caregivers.

Helen Lavretsky, professor of psychiatry at the University of California - Los Angeles (UCLA) Semel Institute for Neuroscience and Human Behavior, and colleagues report a further benefit as well: a reduction in stress-induced cellular aging.

As the U.S. population continues to age over the next two decades, the prevalence of dementia and the number of family caregivers who provide support to these loved ones will increase dramatically. Currently, at least five million Americans provide care for someone with dementia. The detrimental burden on them, in terms of their own lives, can be severe.

"We know that chronic stress places caregivers at a higher risk for developing depression. On average, the incidence and prevalence of clinical depression in family dementia caregivers approaches 50 percent. Caregivers are also twice as likely to report high levels of emotional distress," says Lavretsky. What's more, many caregivers tend to be older themselves, leading to what Lavretsky calls an "impaired resilience" to stress and an increased rate of cardiovascular disease and mortality.

While medication can improve depression, many caregivers may be opposed to the use of medication because of the associated cost and drug side-effects. That consideration motivated Lavretsky and her colleagues to test a brief mind-body intervention for stress reduction.

"To a varying degree, many psychosocial interventions like this have been shown to enhance mental health for caregivers," she said. "Yet given the magnitude of the caregiver burden, it is surprising that very few interventions translate into clinical practice. The cost of instruction and offering classes may be one factor. Our study suggests a simple, low-cost yoga program can enhance coping and quality of life for the caregivers."


- More about the University of California - Los Angeles at: www.ucla.edu