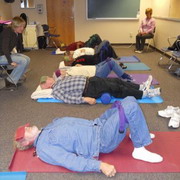 This shows a yoga class in the
corpse pose and mindfulness
meditation;© Indiana University

Group yoga can improve motor function and balance in stroke survivors, even if they do not begin yoga until six months or more after the stroke, according to "Post-Stroke Balance Improves With Yoga: A Pilot Study."

Forty-seven older adults, three-quarters of whom were male, participated in the study. They were divided into three sections: One section engaged in twice-weekly group yoga for eight weeks; the second section met twice weekly for group yoga and was provided with a relaxation audio recording to use at least three times weekly; and the third section received usual medical care that included no rehabilitation.

Improvement in balance was statistically significant and clinically meaningful. It was also greater than previously found by other post-stroke exercise trials. Study participants reported they increasingly attempted new activities in different, more challenging environments and, while aware of potential fall risk, grew confident in maintaining their balance.

"For patients, like those in our study, natural recovery and acute rehabilitation therapy typically ends after six or, less frequently, 12 months," said Regenstrief Institute investigator Arlene Schmid, a rehabilitation research scientist with the Centre of Excellence on Implementing Evidence-Based Practice at the Richard Roudebush VA Medical Centre and assistant professor of occupational therapy at Indiana University-Purdue University Indianapolis, who led the study. "We found that yoga exercises significantly extended rehabilitation beyond the first year after stroke."

Yoga may be more therapeutic than traditional exercise because the combination of postures, breathing and meditation may produce different effects than simple exercise, according to Schmid, who plans to further study the effectiveness of group yoga to improve balance, quality of life and participation in everyday activities. She notes that yoga's mind-body connection may be what makes it more powerful and engaging than other strengthening exercise.


- More about the Indiana University School of Medicine at: www.indiana.edu