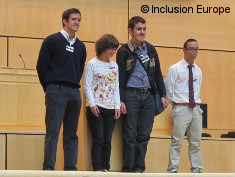 Young people with intellectual disabilities have won backing from key United Nations (UN) figures for their right to have a voice in decisions about their lives. In one of the best attended UN side events ever held in Geneva, members of two UN committees heard compelling testimony from four young people with intellectual disabilities and a passionate belief in their right to be heard.

The message of these talented self-advocates from Bulgaria, the Czech Republic and Spain was summed up by Stani, aged 17. She told the committees on the Rights of the Child (CRC) and the Rights of Persons with Disabilities (CRPD): "If you want to hear my story, you have to be prepared to listen."

Stani – along with Leo, Yoyo and Dominik – kept six members of the CRC Committee and 13 members of the CRPD Committee engaged with a presentation including photos, videos and heartfelt speeches. Their words echoed the thoughts of children with disabilities around the world. While even children with the most severe impairments can express opinions, adults have often not been prepared, or equipped, to truly hear them. This is particularly true of the many disabled children living in institutions worldwide.

The younger people and their families and supporters therefore welcomed the words of CRPD Committee member Ana Peláez Narváez. She encapsulated the view of the committee members when she said: "We cannot make decisions about the lives of children with disabilities without listening to them."

The Geneva event, which took place on September 26, attracted more than 100 participants. It was organized in the framework of Inclusion Europe’s European Commission-funded Hear our Voices project, in collaboration with Lumos, J.K Rowling’s charity, Eurochild, UNICEF and the International Disability Alliance. The project aims to make sure that all children, regardless of their disabilities, are able to meaningfully participate in all aspects of their lives.

Inclusion Europe President Maureen Piggot said: "Children with intellectual disabilities should be involved in every stage of the policy processes which affect their lives. It is crucial they have accessible information, as the four self-advocates emphasized, so they can understand and participate fully and meaningfully."

The event took place with support from the Fundamental Rights and Citizenship Programme of the European Union.

More about Inclusion Europe at: www.inclusion-europe.org