Zero Project: For a world without barriers 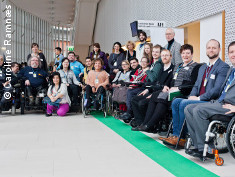 The Zero Project continues to be a success and has grown into an important world organization spreading good policy and practice for the rights of disabled people. Announcing the Zero Project call on education and ICT for 2016. Pass the word to make sure that the Independent Living movement contributes with good examples.

Herewith the European Network on Independent Living (ENIL) takes the opportunity to account for some of the Zero Project 2015 activity to which ENIL contributed. Firstly, this year’s annual conference in Vienna was focused on good policy and practice for Independent Living for which the movement contributed with many examples.

A Personal Assistance panel, led by ENIL, took place during this Zero Project conference in February. Panel members were from Sweden, Norway, Belgium and Spain. Javier Arroyo from the Madrid project on personal assistance shared the Spanish experience, Tove Brandvik and Vibeke Melroy Melström from ULOBA spoke about the situation in Norway, Peter Lambreghts highlighted changes in the Belgium legislation and Jamie Bolling described challenges in Sweden due to new interpretation of personal assistance legislation. The new legislation in Belgium will have all funds going to the person in need of services, and not directly to the institutions. A person will be able to choose the services she/he wants. It stands to be seen how the persons living in institutions will manage to buy services but also provide for their housing.

Other participation during the annual conference from the Independent Living movement included: Onafhankelijk Leven, an ENIL CIL in Flanders, presented their Freedom School and the positive results achieved with this type of training. Young disabled people learned about Independent Living and how to develop personal projects of their choice. The Freedom School proved to be an effective empowerment tool. Peter Lambreghts exclaims “Independent Living is not new, but has come a long way from radical and utopian to innovative practice and through events like the Freedom School it spreads to new people.”

Ines Bulic from ENIL/ECCL led a panel on New Models for Community-based Living Innovative Practices. Andreas Vega from VbA-Selbstbestimmt Leben München was on a panel regarding persons with disabilities employing assistants – New Concepts and Ideas for Living in the Community in Austria – where Andreas emphasized the Independent Living perspective.

ENIL thanks the Zero Project team and the Essl family for the Essl Foundation and its work towards an accessible world! The method of bringing forward good examples and good policy to be used for lobbying works. This is a method ENIL uses to improve the living conditions of disabled people and to spread the Independent Living philosophy worldwide. Existing personal assistance legislation and schemes are highlighted and then support is offered to ENIL members for effective lobby and adoption of legislation to access personal assistance.