"We want to provide dignified, intercultural hospice care for people who are seriously ill"

Companionship – that’s the meaning of "Dong Ban Ja", an outpatient intercultural hospice service in Berlin. This project by the Humanist Association of Germany (Humanistischer Verband Deutschland), Berlin-Brandenburg, is devoted to the care of critically and terminally ill persons. The key aspect here is the fact that patients are cared for by caregivers, who speak their language and understand their religious beliefs and culture. 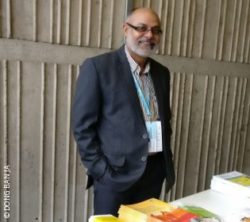 REHACARE.com spoke with the project manager of Dong Ban Ja, Dr. Dharma Raj Bhusal, about the situation of people with Asian immigrant background in Germany and their need for this unique service.

Dr. Bhusal, how did Dong Ban Ja intercultural hospice care get its start?

Dr. Dharma Raj Bhusal: The project originated in 2005 and was primarily intended for immigrants from Korea. By now, its scope has been extended to the entire Asian and also German-speaking realm. Currently, approximately 100 trained 'companions' from Korea, Afghanistan, China, Vietnam, India, Nepal, Japan and Germany volunteer at our facility.

What specific services does the hospice service provide?

Bhusal: We accompany sick and old people of Asian background in their homes, hospitals, and care facilities in their respective native language. If needed, we also offer general advice on dealing with a disease as well as social assistance and care services in collaboration with nursing services, physicians, and family members. But we also assist with palliative care options. In addition, we help with setting up advance directives and finding an inpatient hospice placement. We also take care of involving and organizing additional assistance. And finally, we help with funeral arrangements and grief counseling and assist with questions pertaining to the funeral service.

What is the objective of Dong Ban Ja?

Bhusal: We want to provide dignified, intercultural hospice care for people who are seriously ill in a manner that honors their personality, culture and religion in different cities. Since there are unfortunately only few immigrants, who are not only interested but also have the time to devote to this mission, we are very keen to attract and train additional volunteer associates from different countries. Our target audience includes people from different cultures and religions, who are able to provide culturally sensitive and spiritual care and companionship after their training. For us, cultural sensitivity primarily means respect, mindfulness, and appreciation of people from other cultures and different religions.

Why is this type of specialized hospice care needed?

Bhusal: There are approximately 70,000 people with an Asian immigration background living in Berlin. Although most of them are integrating well, a tendency to maintain the traditions and lifestyles of their native countries remains. This is particularly evident during the last stage of life or in the case of critical illness. In Asia, people also often have a different way of dealing with pain and sickness than we do in Germany. We have frequently noticed that older people, especially those suffering from Alzheimer’s disease, start to forget the German language again, even if they were previously able to communicate in German. Food from home and religion are also becoming important again at that point. This is why it is essential to have trained people, who speak the same language and are familiar with the respective culture.

To this day, showing respect to older people is still a tradition in families in those respective countries. Older people make important decisions and generally, meaning more than 70 percent of them, live together with their children and grandchildren. They take care of the grandchildren, take care of household chores and are financially supported by their children as well as taken care of if they require nursing care. Many people from Asia, who live in Germany, initially reference the family support system they know from their native home and don’t realize that the situation is entirely different here in Germany. Their knowledge of the German language is often inadequate and they are subsequently ill informed about the available aids and services in Germany. Many times they are in poor health due to precarious working conditions and because they didn’t take advantage of preventive services earlier. Many live at home on their own or in care facilities and know little about the German long-term care or healthcare system and social security services. 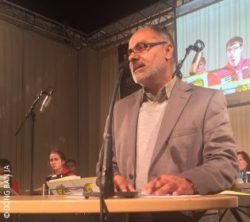 Why is this service so important for the affected persons?

Bhusal: To alleviate problems and deficits, we train volunteer hospice staff, so they are able to guide and accompany sick and dying people and their family members from different cultural groups in their respective native language. Strange habits, different religious beliefs, and views of life as well as different illness perceptions can result in misunderstandings, especially at the end of life. This requires cultural sensitivity and support. With a great deal of empathy, human compassion and strength, our volunteers not only show these people affection but also provide a piece of home.

We once visited a patient in a hospital in Eberswalde. He was originally from Vietnam. The doctors told us he would die soon. When we visited him, he was lying motionless in his bed. The hospice caregiver introduced me and said that I was born in "Buddha’s native country" Nepal. The patient, a Buddhist, was so excited about this news, he sat up and happily chatted with us. This experience gave him strength again.

How do volunteers obtain professional qualification and motivation?

Bhusal: We have relevant training modules and our own experienced instructors. Training takes place annually, once or twice as needed. The duration of the course is approximately 130 hours. The course schedules are adapted to the participant’s availability. If needed, the courses also include a translator or take place in the participant’s native language. Participants are allowed to perform a 40-hour inpatient or outpatient practice session before course completion or during the actual training. The associates obtain a certificate upon completion of training.

We also provide frequent supervision as well as additional further training pertaining to current and interesting subjects. Additional experience exchange takes place through round tables and movie nights. The caregiver finally works in the field after an initial consultation with one of our coordinators. Sometimes, the accompaniment might only take a few hours but can sometimes take days, weeks or an even longer period of time. The aforementioned additional services are primarily intended to motivate our voluntary associates to commit to this project and to show them our appreciation and respect for their work.

What is your hope for the future of intercultural care?

Bhusal: I hope for a more sensitive approach to practical care services for immigration patients within care facilities. Oftentimes, they have little knowledge and experience as it relates to culture-based desires and needs. I would also be thrilled if the work of the volunteer caregivers was more appreciated by these facilities and the nursing staff. My vision is intercultural hospice care in several cities and locations to make it possible for old and sick people to experience dignified, intercultural hospice care that honors their personality, culture and religion.

Read more editorials in Topic of the Month's April here:

Click here for the interview with Professor Claudia Kaiser