Pigs brings back many memories and emotions, especially for older people because they remember them from their childhood. And that’s exactly what the Dutch physical therapist Daan Vermeulen draws on. He visits retirement homes, schools and other facilities with his pig Felix. With the help of his pig, he is able to playfully boost the senses and mobility of people with dementia. 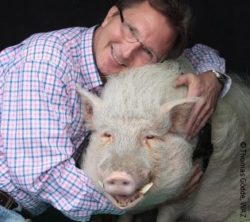 In this interview, REHACARE.com asked Daan Vermeulen why his assistant is a pig and what makes working with him so special.

Mr. Vermeulen, how did you come up with the idea of having a pig versus a human being as your assistant?

Daan Vermeulen: That was a total coincidence. Twelve years ago, we got a pig as a pet for our own home. His name was Rudi and he has passed away, unfortunately. Since our children weren’t home to take care of Rudi, we had to take the little piglet with us to our medical practice. We secretly hid him under a sweater in the storage room. Apparently, he was bored and we let him run around. The patients in the adjoining waiting room obviously noticed him and they wanted to see Rudi. The positive reactions we observed then gave us the idea to "hire" Rudi. Later on, we added our second pig Felix to the mix. I am still out and about with him today.

Why are pigs so well-suited to help treat people with dementia?

Vermeulen: I had previously never heard of pigs being used for therapeutic purposes. But older people tend to respond to pigs. They typically know them as farm animals from their childhood. When I visit a retirement home, people suddenly reunite with an animal they haven’t seen in 40 or 60 years. The surprise of seeing this type of animal stirs up emotions and many thoughts. The pig opens the door for me in a manner of speaking. I am able to work with these emotions. But Felix doesn’t actually treat people, he is my assistant.

Having said that, it’s not just thoughts about the actual farm animal that come up but also experiences people had back when they took care of themselves or were cooking. With Felix’s help, I am able to bring thoughts from the past into the present. I noticed first-hand that the use of pigs in geriatrics has been very successful.

What does a therapy session look like with Felix?

Vermeulen: For example, while I let Felix do something, I watch my patients. I then ask questions such as what type of food I have in my box for him for example. This allows me to boost people’s memory and perception. I also include motor and sensory exercises by letting the older adults brush Felix’s bristles with a brush for example. Or I show them a sock stuffed with walnuts and have them feel and guess what’s in the sock. Afterward, Felix is allowed to crack the walnuts.

Older people and children have the exact same reactions. Although older people have usually lost their spontaneity, children still have a lot to learn. Yet as soon as Felix enters the room, he stirs up positive emotions no matter how old people are. 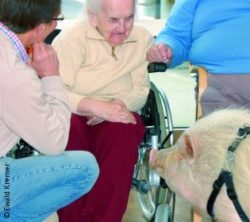 Even though Felix is a tiny therapist assistant, he is still an animal. He also accompanies you to nursing homes. How is he able to step up to so many strangers in such a trusting way?

Vermeulen: Although he is a prey animal with a fight-or-flight response, he does not feel threatened by the presence of many people. Since birth, he is used to being among people and being touched. You can’t do this with all pigs; only some animals are actually able to tolerate it. I was simply lucky that he has the nature for it. He is not scared and afraid of being touched. Besides, he lets you know if he doesn’t like something, yet still remains calm. For example, if he doesn’t want to be touched by someone because the person scares him – for instance, children with ADHD who move too quickly- he keeps his distance.

I didn’t have to train him for that. Since I always took him along to group therapy sessions, he gradually learned to deal with these types of situations.

What requirements did you have to meet?

Vermeulen: Needless to say, working with a pig requires an official approval under Article 11 of the Animal Welfare Act. I had to successfully complete a training course and pass an exam at the regional veterinary services area office. There are veterinary requirements you have to meet because people are actually not allowed to just take a pig and travel or walk around with it in Germany. I have a special permit allowing me to do this. Those are perhaps very steep requirements to meet but it’s all worth it.

What specific results were you able to achieve and witness in patients using this type of therapy?

Vermeulen: Persons with dementia are suddenly more active, they move more and feel more empowered and confident. The nursing staff is usually quite surprised to see what people are suddenly able to accomplish again. Residents, who have otherwise always been very passive and carefully thought about their actions, suddenly respond on the spur of the moment. We also had incidents where people who typically use walkers, are all of a sudden able to walk better. They feel motivated and want to brush Felix. Sometimes patients start to talk again, even though nobody had any idea they were still able to do so.

However, this is where my job comes in and it’s no longer Felix’s task. I have to figure out how to get inside the minds of people and tease out a reaction. By being there with me, Felix makes my job much easier.

Read more editorials in Topic of the Month's February here: