Stroke: An instant that changed a life

"I make the best of it, in spite of the impairment, for the sake of inclusion." At 20, Marina Fraas experiences a turning point in her life thanks to a stroke. At the time, she finds her calling. As an Ambassador for Inclusion, she fights and stands up for others.

A soccer match changed the life of the now 27-year-old: the ball hits her neck. She keeps playing. There seems to be no injury. Two weeks later, the student suddenly becomes hemiplegic from one second to the next. "At first I thought, I may have pinched a nerve in my hip but somehow everything felt so differently." Still, she is not terribly worried. It takes a few more hours before she finally calls her parents. The symptoms are obvious: she is unable to speak and only able to groan. Her mother, a nurse, has her taken to hospital by ambulance. This is where she gets her diagnosis: she had suffered a stroke. The jolt to her neck loosened a blood clot that later traveled to her brain. The result: she loses her speech for months, has problems with concentration, attention, and memory and suffers paralysis on one side of her body.

From one day to the next, the young competitive athlete became impaired, had to drop out of her "International Management" studies and had to start from scratch. For three to four months she was entirely unable to speak and was only able to communicate non-verbally. At some point, she regained single words and during the following one-and-a-half years of rehabilitation, she learned to speak a little better with each passing day.

She is a fighter and determined to take her life into her own hands. That’s also why she would not let physicians tell her to just wait and see. She ends up embarking on a new study program, even though she is still unable to speak at that point. Her new goal is a bachelor’s degree in rehabilitation psychology. It works and her studies also turn into "self-therapy sessions" at the same time.

For her bachelor thesis titled "Living with chronic aphasia – a qualitative approach", Marina Fraas asked affected persons how they view their life with aphasia. "I simply wanted to find out if I am different from others or the same in dealing with this disease." The results have shown her that everyone can create their own life. If you need help, you receive help if you are willing to accept it. If you refuse help, you simply won’t get it. She has learned to accept help and take advantage of opportunities.

"My acknowledgment was different after my studies. It is really interesting if you are able to scientifically analyze this disease. It has helped me and now I want to help others in return." Marina Fraas has promised herself to make the things she had to go through easier for others. "When you are affected yourself, you are able to understand other affected persons much better than outsiders can."

"I will never be able to talk the way I used to," she says because she will always have some "residual aphasia". But that’s something she is able to live with because "I am not holding myself back". "Sometimes it’s the people I talk to that hold me back," Marina Fraas adds "because they are annoyed by the fact that I speak so slowly. But I won’t let that bother me. They are just impatient and have no idea what really matters in life." 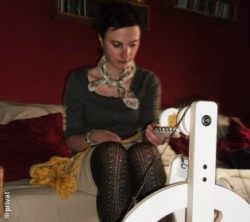 Accessible hobby: "Spinning and felting also works well with one hand, there are no limits to creativity," says Marina Fraas.

At this point, Marina Fraas pursues a master’s degree in "clinical psychology and psychotherapy" and has found her calling by helping others. She is a representative in the Student Parliament for the Integration of Students with Disabilities and Chronic Diseases, takes an active part in various stroke support groups such as the "Young adults with aphasia" group for example, and she is the Ambassador for Inclusion of the "Living a Self-Determined Life in Germany" special interest group (Interessenvertretung selbstbestimmt Leben in Deutschland e.V.), ISL. Wherever inclusion is actively pursued, you will also find Marina Fraas. She creates new things with ideas and imagination.

Inspired by her own paralysis on the right side of her body, she teaches other patients how to knit with one hand. "You can also do spinning and felting perfectly with one hand. There is no limit to creativity." Marina Fraas wants to spend her time in a meaningful way. Her goal is the reintegration into society, which ensures the social and mental health of the affected persons.

As an Ambassador for Inclusion, she also wants to help people with and without disabilities to equally participate in society together, thus creating a better coexistence. "We are all human beings, regardless of whether we have a disability or not or no matter where we come from." She also wants to continue to pursue her dream through her studies and later on in her professional career. "Maybe I will pursue my doctoral degree focusing on the issue of 'inclusion' in some form or another. Or I will get involved in other areas of inclusion and politics. I am still unsure of what exactly it is going to be but my special field of study perfectly lends itself to this."

Read more editorials in Topic of the Month's October here: