When we think of Brazil in these parts, we visualize Carnival in Rio de Janeiro, the Copacabana and Sugarloaf Mountain. Sports enthusiasts might also remember Formula 1 legend Ayrton Senna or when the German team beat Brazil 7-1 in the 2014 World Cup semi-final match. Yet when it comes to inclusion or – more specifically – the role of sign language in everyday life, Brazil is likely not the country that first comes to mind. Liona Paulus, a PhD candidate at the University of Göttingen and deaf sign language interpreter believes that’s not fair.

Liona Paulus is a lecturer at the DGS and a sign language interpreter. She is currently employed as a research assistant and a PhD candidate at the University of Göttingen.

Ms. Paulus, after you passed the Abitur (German university entrance qualification), you spent time in Brazil. What took you most by surprise about Brazil’s approach to deaf people?

Liona Paulus: Back then, I was very surprised by how advanced sign language was in Brazil. For personal reasons, I started to read up on Brazil and its deaf community at the turn of the millennium. At the time, I was unable to find much information online, which initially led me to believe that Brazil was "underdeveloped" in this regard. What a colonial and naïve mentality I had back then! That being said, it piqued my curiosity and prompted me to visit and then live in this country. When I arrived there in August 2004, I was completely surprised by how rich and vital Brazil’s sign language – known as Libras – and how progressive the country’s education system were.

For example, back then, the Brazilian schools for deaf students already featured many teachers who had a good command of Libras and routinely used it during their lessons.

Meanwhile, things were entirely different in Germany, our rich and progressive country. In my school career in schools for deaf and hard of hearing students, I never attended classes in German Sign Language (Deutsche Gebärdensprache, DGS). Everything was based on spoken (oral) language and articulated sounds and was very technical (by using highly sensitive and very expensive hearing aids and FM systems in the classroom). Sign language was only used informally during breaks and outside of school, which is why I only acquired it within this context. This was and still is different in Brazil. That's what got me so excited.

Why is Brazil ahead of Germany in this respect?

Paulus: I think that was simply caused by political and monetary necessity. Brazil is a Global South country with political and economic instability and a healthcare system that only provides basic services. As a result, there is simply no money for the latest technology and equipment in Brazilian schools for deaf students and there are limited financial resources for hearing aids and cochlear implants (CI) for deaf children and adults. That’s why the use of sign language – to put it bluntly – is a somewhat "cheaper" and more pragmatic approach, which now greatly benefits deaf Brazilians. This clearly helps the Brazilian Deaf Community because policymakers have recognized this group as a linguistic minority in 2002 in a law and things have expanded a lot since then. The Deaf Community in Brazil is currently very active, well-connected and its sign language - Libras – is everywhere on TV, on monitors as avatars at airports, in tourist centers, at political rallies and debates and in many other places. Virtually all public and private colleges/universities offer Libras courses.

Attempts in Germany try to use health insurance money and political and medical tailwind to fix deaf children and adults with hearing aids or cochlear implants and spoken language education (preferably without sign language). This also affects the German Deaf Community. School enrollment in schools for deaf students and membership numbers in Deaf Clubs are continually declining and the formerly strong network has holes. By the way, the German Deaf Community and its sign language were also recognized in 2002, though not as a linguistic minority but as a group of people with disabilities. However, thanks to the UN Convention on the Rights of Persons with Disabilities (CRPD), German policymakers are forced to do more for deaf citizens, i.e., providing access to varies sectors via German Sign Language (DGS). This includes political campaigns, theater events with sign language interpreters, the right to sign language in training, education and in the workplace. It increases awareness in the German Deaf Community and piques the interest of the hearing population in German sign language and Deaf culture again, albeit at a very slow pace.

You have been back to Brazil several times since your first trip. What has changed between your visits?

Paulus: I am there almost every year (sometimes for an extended period of time to do some field research for my dissertation in Sign Language Linguistics at the University of Göttingen) and consider Brazil my second home at this point. I have noticed two things in the last decade. First, there is a higher level of awareness in Brazilian society when it comes to Libras and the Deaf Community. I recently watched TV in São Paulo one night and there were THREE broadcasts with sign language inserts on TV at the same time. And not like it usually happens in Germany: only on the Phoenix channel during evening news broadcasts and rarely or hidden online in media libraries. It means that Libras becomes distinctly visible thanks to television and up to 200 million Brazilians get to experience it every day. I often meet people who know basic Libras – for example, at the airport information desk, in many museums or waiters in restaurants.

Deaf people are able to quickly learn the sign language used in another country. Thanks to social networks and international Deaf Events, there is a language contact phenomenon called 'international sign'. International sign can be learned in just a few hours because it is a combination of different sign languages, largely made up of highly iconic (symbolic) hand gestures that are similar or most commonly used in many sign languages, and are therefore easy to understand and use for most deaf people from different countries. Unlike two people communicating in spoken language who don’t speak a common language, this simplifies communication among deaf persons.

On average, I meet at least one person with hearing per day who knows how to communicate with Libras. This virtually never or very rarely happens to me in Germany. This is possible thanks to the Letras Libras degree program. In almost all programs, its graduates teach sign language as a compulsory (!) elective module, thereby automatically communicating the Deaf Community culture at universities/colleges. We lack something that is comparable in Germany.

Secondly, I also noticed that Brazilian society has become more politically stable and better off financially since 2006. Citizens have been able to afford more traveling, including excursions to Europe and Asia, and spend more money on cosmetic surgery (the obsession is all too real!), condos etc. This also applies to the Brazilian Deaf Community. That is to say, deaf Brazilians frequently earn more money and show the majority society that they are equally successful and can be just as prosperous as everyone else. This is backed up by a "rags-to-riches" mentality, which – aside from the U.S – is more common in South America than in Europe. As a result, Brazilian society increasingly considers deaf people less as 'people with disabilities' and more as equal citizens since deaf people can achieve their goals just as well as the average Joe or Jane. In other words, there really is no difference. Having said that, there are currently some alarming and negative political and economic developments that I consider worrisome for Brazil’s future. However, that is a whole different subject and we have to wait and see what the future holds. 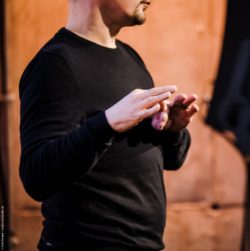 There is a lack of sign language interpreters in Germany. Liona Paulus would therefore not only like there to be more universities with a corresponding course of study, but would also like the DGS to become a language of instruction for the deaf and a possible elective subject for regular schools.

What development would you like to see in Germany as it pertains to deaf people or people in general, especially compared to Brazil?

Paulus: I wished the developments I was a part of and observed in Brazil would also happen in Germany at this fast pace. One example here is the creation of a (distance) learning program for sign language teachers and sign language interpreters. Throughout Brazil, this type of program (Portuguese: Letras Libras) has been available since 2006, and over the last twelve years, more than 1,300 (!) deaf persons have graduated in Libras. Unlike Germany, where something similar is only possible at two universities (Hamburg and Berlin). However, hardly any deaf students attend because the requirements for the German Abitur Certificate and subsequent studies are very difficult to meet for deaf students. This is also reflected in the shortage of DGS lecturers/teachers and, indirectly, sign language interpreters (sign language interpreter courses necessitate DGS lecturers with a university degree).

I would like to mention another incredible aspect in this context, which is also very beneficial and desirable for Germany. Namely, for deaf people to be able to pass the German Abitur in German sign language. This has been an option in Brazil for many years, and a possibility in Libras since 2017! Generally, I would like to see a more relaxed approach to sign languages ​​and bilingual competencies (in this case German/DGS) in the education system and in German society. There is still too much emphasis on spoken language skills. This view is too monolinguistic or one-sided, respectively. It never hurts to speak multiple languages in different forms.