Inclusion around the world: Developments that promote participation in society

From Spain to Brazil to Singapore: Inclusion and participation in the community should be a central idea and transcend country borders. REHACARE.com investigated whether and to what extent this is the case in various countries around the world and looked at the solutions that have already been implemented.

The lights are dimmed, background noise is reduced and assistance dogs are most welcome – since April 2018, this is a once-a-week scenario in Lidl stores across Ireland and Northern Ireland. Every Tuesday night, the grocery store chain creates conditions that make it as comfortable and relaxing as possible for people with autism to do their shopping. A map of each store is also provided and marks the areas where smells and odors might be stronger or where it might be very cold, allowing customers to avoid them during their shopping trip if necessary. This concept is greatly appreciated: Many people on the autism spectrum and parents of autistic children gladly take advantage of these two quiet hours. Yet it’s not just Irish people with autism who are excited about this idea. An online petition in Germany also requests the introduction of autism-friendly shopping experiences. So far, more than 2,000 signatures have been collected. However, Lidl Deutschland (Germany) has no plans for a similar campaign at present.

The coffee chain Starbucks take things a step further than Lidl. Recently in Washington, D.C, a first location was opened, featuring a concept that is completely tailored to the needs of the deaf and hard of hearing. The store’s 24 employees are either hard of hearing or deaf. That’s why they only communicate with customers in American Sign Language (ASL). Customers who are able to hear and who don’t know ASL can order their coffee drinks with the help of a tablet. The store follows the example of a Starbucks coffee shop in Kuala Lumpur, Malaysia, which opened two years ago and was also created with deaf people in mind. Incidentally, the U.S. coffee shop is located near the Gallaudet University - the world's first university for the deaf and hard of hearing.

Examples like these show that there is an increasing level of awareness of the needs of different target audiences. Liona Paulus, who is also deaf, can attest to this based on her own experience: "There is an increasing interest in sign language, which is very important to promote an inclusive society. But there is definitely still room for improvement." What she means by that is – among other things – that German Sign Language (DGS) should become the primary language of instruction in schools for deaf and hard of hearing students, which is so far not the case. To create a more open and communicative society in the long run, she also insists that DGS should be introduced as an elective course at mainstream schools. In addition to DGS, Paulus learned Brazil’s local sign language Libras during her multiple extended stays in the country. In a REHACARE.com interview, she talks about her experiences in Brazil and describes the unique features of Libras.

Whether it’s in America, Brazil or Germany – sign language always works face-to-face. To communicate across greater distances, video telephony solutions or other assistive technologies can help. Researchers at the Institute for Technology Assessment and Systems Analysis (ITAS) at the Karlsruhe Institute of Technology (KIT) concentrated on this subject for a year. The study focused on assistive technologies and their use and benefits in four European countries. One conclusion was that digitization has a pivotal impact in this context. "That’s why there is a trend in assistive technologies to understand these technologies less as medical devices and more as 'conventional' technologies, especially within the realm of digitization, i.e., as integrated features of the smartphone, open-source software etc.," says project manager Linda Nierling in an interview with REHACARE.com. "Needless to say, this poses major challenges for laws and regulations pertaining to assistive technology as medical devices as they must strike a balance between access, innovation potential, security, and privacy aspects." Meanwhile, the study findings also indicate that it is often not about the perfect high-tech solution, but rather about developing AT options in the midrange – "so-called 'mid-tech' solutions – that focus on social inclusion in the respective context".

Nierling adds that the European comparison, in particular, indicates that the practice of national anti-discrimination policies is also a determining factor in technology use. It is essential to cultivate a long-term perspective and development to ensure accessibility, whether it is of a physical (buildings, mobility) or virtual (Internet) nature. "And while countries like Sweden have already fostered this for the past 35 years, Portugal is still only in the early stages of this process. An exchange of 'best practices' across European national borders, as well as a thorough inventory, can make a major contribution to the use and provision of assistive technologies." 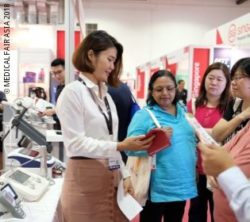 Rehabilitation, orthopaedics, geriatrics: In the Community Care Zone at MEDICAL FAIR ASIA 2018 in Singapore, exhibitors were able to present their specific products to interested trade visitors.

Taking a broader perspective and communication across borders (within Europe) is definitely beneficial. Take the example of the Asia-Pacific region. According to the United Nations Economic and Social Commission for Asia and the Pacific (ESCAP), there are 690 million people with disabilities living in this area of the world. This number is set to continue to increase due to demographic changes, chronic diseases, and other factors. Healthcare systems around the world – including the one in Singapore – are facing these challenges, which are compounded by the shortage of skilled healthcare professionals and caregivers. To meet the resulting requirements and needs, the industry sector must develop new models of healthcare.

The MEDICAL FAIR ASIA was held again in late August of 2018 in Marina Bay Sands Singapore against this backdrop. The trade fair showcased more than 10,000 medical and healthcare innovations and solutions – among others, in the fields of rehabilitation, diagnostics, geriatric medicine, and digital healthcare. With 1,000 international exhibitors from 62 countries, the first Community Care Zone focused on geriatric medicine, rehabilitation, and orthopedic devices, as well as remote healthcare monitoring products and services. Not only the exhibitors but also the more than 14,000 international trade visitors were very excited about the Community Care Zone. This area enabled them to not only systematically search for products that are of interest to them, but also to forge contacts with specialists and experts.

The Russian team of CYBATHLON 2016 were also first-time participants of the MEDICAL FAIR ASIA trade fair and showcased brain-computer interface technology, as well as the CaterWil stairs climbing wheelchair. The CYBATHLON Showcase in Singapore, which has also been featured at REHACARE in Germany in recent years (also see video of BCI game at REHACARE 2018), offered trade visitors a unique experience and the chance to try out bionic assistive technologies and participate in a BCI race. "Brain-computer interfaces (BCIs) measure brain signals, and there are plans to develop this technology further so that it will allow people with quadriplegia to control different kinds of devices like computers or wheelchairs in the future," says CYBATHLON director Roland Sigrist.

Jesús Hernández-Galán from the Fundación ONCE in Spain was not a participant in Singapore but presented at the REHACARE 2018 trade fair. As part of the first European M-Enabling Forum, which also highlighted assistive technologies and digital accessibility, and in an interview with REHACARE.com, Hernández-Galán talked about the situation of people with disabilities in the Spanish labor market. To finally implement the UN Convention on the Rights of Persons with Disabilities, the wheelchair user suggests the following: "We should continue to work hard to raise awareness among business managers, government representatives, and the general public. The main objective should be the normalization of people with disabilities to achieve a fully inclusive society. When companies, institutions, organizations and society generally start to perceive people with disabilities simply as human beings – without the 'disability' add-on – this goal can definitely be achieved."

Whether it’s Spain, Singapore or Brazil – there are many challenges to overcome on the path to an inclusive society. Having said that, with the support of people with disabilities as experts on their own turf and the integration of assistive technologies, participation and inclusion in society as outlined by the UN Convention on the Rights of Persons with Disabilities should be possible.

All the examples presented here are of course only a small selection of what is already being implemented worldwide in terms of inclusion. Further examples can be found in our interview series WE ASKED: