Ever since his duel with "pro gamer" Sebastian Lenßen aka Sep from the German PietSmiet gamer collective, Dennis Winkens from Viersen has epitomized gamers with disabilities and their gaming community. In this interview with REHACARE.com, he explains how he discovered gaming, talks about things that can throw a monkey wrench into his game as a quadriplegic and reveals how he lobbies for increased accessibility in the video game industry. 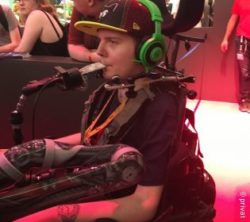 That's how it looks like if Dennis Winkens plays at his computer or his Play Station system.

Mr. Winkens, when and how did your passion for gaming begin?

Dennis Winkens: It all started with a Game Boy when I was about five or six years old. Later, I added a Commodore 64 computer. I basically played all of the classic games: Super Mario and The Legend of Zelda on the Game Boy, and the Winter Games on the Commodore – that one was a tough nut to crack.

What device do you use to play these days?

Winkens: I mostly use my PC since my accident. I have played most games on my new computer that I purchased at the beginning of last year. Even though I also have a PlayStation 4 system, it is easier to start a game off my hard drive, since I am already on my PC.

You actually use a QuadStick. What is that exactly?

Winkens: It is a game controller that assists people with quadriplegia. The QuadStick is a mouth-operated joystick. The mouthpiece has three sip and puff holes to operate the system. The multiple holes and the intensity of the sipping or puffing motions allow players to control the QuadStick. It also comes with a small position sensor that’s operated by using your lower lip. This gives you approximately 32 functional options you can use per game mode.

Today's game controls are very complex. How do you select games that are right for you and decide which aren't?

Winkens: If the game has already been released, I watch it on YouTube Let’s Plays to check out how it works. Usually, the controller assignment is already available online as well. Game demos are another option that has become increasingly rare. Those demos allow you to see whether you like the game.

When it comes to playability, the golden rule is: the more tools you need to play it, the harder it gets. First-person shooter games are the ultimate video game genre. Once you need dual analog sticks for a game’s control scheme, things get difficult with the QuadStick in terms of setup.

Having said that, there are otherwise virtually no limits. Needless to say, a lot clearly depends on your own abilities and how well you are able to work the controls. If you prefer a specific video game genre, the basic control scheme is essentially always the same. This also allows you to get the hang of new games. However, you obviously always have to experiment a little and revise or adapt the controls. This is a continuing learning process and also always depends on your know-how.

What were your favorite games in 2017?

Winkens: I love to play Rocket League. I was also able to work my way into Watch Dogs 2. A game where I keep updating and adapting the controls. Apart from that, I also like to play simulation games like Euro Truck Simulator.

Sep (left) of PietSmiet already had his revenge after his loss in the Formula 1 game against Dennis Winkens (in front). But there is another rematch which should take place this year between the two gamers.

You had your big gaming appearance at gamescom 2016, where you competed against Sep (Sebastian Lenßen) from the PietSmiet gaming collective. How did this duel, which got you major media attention, come about?

Winkens: The reason behind the duel was the "Neue Nähe" project by the Aktion Mensch (a nationwide social lottery in Germany that provides support for nonprofit organizations working in the field of disability, as well as generally supporting inclusion in society). Thanks to my controller, gaming became an interesting topic. This is when the idea came up to compete against Sep during the gamescom.

Back then, you went up in a race against the leader in the previous Formula 1 game version. Not exactly the easiest game if you don't use a standard controller, is it?

Winkens: As a genre, I love racing video games but I prefer arcade-style racing like the Need for Speed series or Dirt. Those are obviously games that don't necessarily emphasize driving accuracy. Meanwhile, Formula 1 is actually more of a racing simulation game.

Having said that, you actually had a four-second lead over the "professional" in one round. Sep took revenge on you in Cologne this year in Rocket League and won that round. Do you already have a 2018 date set for the rematch of the rematch?

Winkens: Sep is definitely interested in doing this but we have not set an official date yet. But I will definitely follow up with him as well.

How important is it for you to raise awareness of accessibility?

Winkens: Extremely important. We are fewer in quantity than the others but we are growing in numbers. At any rate, the interest of people with disabilities in gaming is great. I try to determine where I can help. For example, I help beginners with using the QuadStick. There is generally a lot of mutual assistance in the community. However, I also look for alternative controllers and enhancements for the QuadStick. Many gamers also try to develop a personal relationship with manufacturers. We are not a large community and known to the point where we can exert public pressure. However, once you get in touch with developers, they are usually very interested and willing to make changes to ensure more accessibility.

Things have already improved in the industry but what still needs to happen to make gaming an option for more people?

Winkens: After I was unable to get an appointment with the two major manufacturers Sony and Nintendo, I got in touch with a startup company during the last gamescom. Things are definitely in the making but I am not allowed to reveal any concrete details. I also recently provided input on accessibility for a beta test for a small independent game. Even though the questions were still of a more general nature, things are definitely improving. Generally speaking, there are more and more gaming-related questions. As part of the HelpCamps Barcamp (see We asked), the maker movement has recently also expressed interest. 3D printing likewise offers many new possibilities.

Generally, it would be much appreciated if the major manufacturers would pay more attention to this subject and also allow controllers made by third parties for special purpose solutions for example. PlayStation asks me every ten minutes whether my QuadStick is the original controller. If I have to constantly confirm that everything is correct, it relentlessly interrupts your game.

"Normal" video games played with consoles are already difficult in terms of their accessibility. What do you think about the trend towards virtual reality games wearing VR glasses?

Winkens: Needless to say, these games allow you to immerse even more in other worlds. The actual idea is intriguing. I have already tested this, although I was unable to connect my QuadStick. VR glasses obviously limit my range. If you are required to move around a space without a conventional controller, it clearly makes many games unplayable.

Augmented reality technology with HoloLens could offer more options for people with disabilities. The control mechanism could be voice-activated or done with an extra pressure sensor. Since the "screen" is integrated into the user's own field of vision, there is no risk of accidentally bumping into other persons or objects in the room.

Read more editorials in Topic of the Month's January here: