For many people with disabilities, the wheelchair is not just their everyday companion but increasingly also turns into sports equipment. What are some of the differences when this assistive device is used for recreational purposes versus in professional sports? And what makes them so unique? REHACARE.com has asked several athletes to find out.

In wheelchair rugby, the chairs are equipped with special features depending on the playing position: The low pointers (left) on the defensive have the so-called bumper at the front and the high pointers (right) on the offensive, for example, have rounded corners.

"From a design perspective, there is not much difference between rugby wheelchairs and a custom everyday wheelchair or a basketball wheelchair," says Christoph Werner, coach of the German Wheelchair Rugby National Team. "With that being said, a rugby wheelchair includes more parts designed to protect the legs and the wheelchair in general." Depending on the player position, the chairs have added features. The offensive chairs for high pointers have rounded corners and edges for example, while the defensive low pointer chairs feature a front bumper.

However, the biggest difference compared to a leisure wheelchair is the stability of the chairs. "Most athletes prefer an 18 ° wheel camber to make the wheelchair more maneuverable. Each rugby wheelchair also has two additional mounted anti-tip guards," adds Werner. In Germany, rugby wheelchairs are available at Otto Bock from the company’s factory site in Königsee or at the Schmicking Company in Holzwickede. The Vesco Company in the U.S. and the New Zealand Company Melrose Kiwi Concept Chairs USA are among the international vendors.

Werner emphasizes that the wheelchair should fit the person like a well-fitted suit or a pair of shoes. "The better the wheelchair is adapted to the respective player, the better the game. That’s why it should truly be custom-made so that the athletes become one with the chair." The national team wants to get this type of gear for next year to guarantee a successful European Championship and hopefully make it as far as the semifinals. "However, making it to the 2020 Paralympic Games in Tokyo is still our main goal." 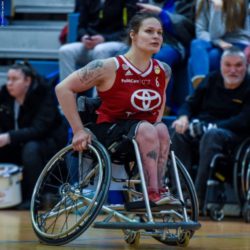 Lisa Nothelfer plays on the basketball court in a Meyra Hurricane, which was not only designed for the sport, but also individually adapted to her needs.

That’s also Lisa Nothelfer’s athletic goal. Although the Wheelchair Basketball World Championship in Hamburg is right around the corner and scheduled for August 2018, she firmly keeps her eyes on the Paralympics. Thanks to a rigid frame and needed stability, a Meyra Hurricane wheelchair offers this national player everything she needs on the court.

This is also where the differences to a common leisure chair become evident: "The seat position is different because you need maximum mobility. Several body parts are strapped in. You also have lower body protection on the front and angled wheels."

To achieve optimum performance, it’s crucial to adapt the wheelchair to accommodate the respective degree of disability. Ultra-lightweight wheelchairs also increase speed. If all the players on the national team are outfitted with these types of adapted wheelchairs, a great foundation for future athletic success has been laid. 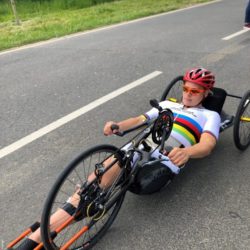 Good aerodynamics and a low weight of the hand bike are important in handcycling and are often decisive, especially in time trials.

That’s also something that’s important to Christiane Reppe. Apart from the annual World Championships, the successful hand cyclist has another big goal – as do many other German para-athletes – and that’s to attend the 2020 Paralympic Games in Tokyo. But she seeks to tackle even more challenges and has her eye on the Ironman World Championship in Hawaii. "My personal goal here is to persevere and keep up! My focus won’t be on finish time or breaking records," says Reppe about her participation in the classic Triathlon race.

Her tool of choice is a Shark 5.0 carbon hand bike made by Sunrise Medical. "It's the first handcycle made by Sunrise Medical that has a complete carbon frame, which makes it considerably more lightweight. Some bright minds developed the hand bike to optimally equip the international Team Sunrise for the 2016 Paralympic Games in Rio de Janeiro. Of course, aerodynamics was a focal point during its development. What makes the bike so enjoyable and comfortable is the fact that the rider no longer feels like he/she is lying down in the bike, but that he/she is surrounded and framed by the bike from the hip down. Compared to the older Sopur Shark RS version, this new handcycle has made a giant leap and has significantly improved the lives of hand cyclists," Reppe gushes about her athletic device.

All these details also play a big role in Reppe's performance during competitions. After all, when it comes to time trials, aerodynamics and the weight of the hand bike are crucial factors. “The way I like to explain it is that every kilo must be accelerated and once there, I have to keep up the speed." Depending on whether the race course is mountainous or flat, this can amount to several seconds, which ultimately determines whether an athlete wins a Paralympic medal or whether he/she goes home empty-handed. 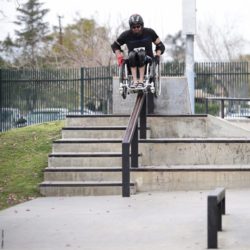 Professional tomcat David Lebuser wants to further strengthen and advance the WCMX scene in Germany and Europe. "There will soon be more competition, but of course there will still be many tryouts and workshops," says the third in the world rankings.

While basketball, rugby, and handcycling have been among the Paralympic sports for quite some time, there is one sport that is becoming increasingly popular, but has so far not made it into the big leagues yet: wheelchair skating (skateboarding) or – as it is known in the professional community – WCMX (Wheelchair Motocross). What began as a recreational sport has become increasingly professional in recent years, and there are now both World Championships and National Professional Championships. For the first time, August 18 and 19 of this year will mark the International German WCMX Championship. The venue is Hamburg. David Lebuser – currently ranked third in the world – would like to win the German Championship title, but also wants to defend his third place international ranking for as long as possible. "But the young people are breathing down my neck and that's a good thing," the German professional wheelchair skater confesses. He is actually excited about the growing competition, since it means that the WCMX scene in Germany and Europe gets a boost and presses ahead.

When Lebuser started with WCMX, the sport didn’t even have a name yet, let alone special wheelchairs. "So I tried many things and collaborated in developing special wheelchairs. TNS from the Netherlands ended up building my first real skating wheelchair for me. Later, I was sponsored by Box Wheelchairs and chose a special WCMX SeanCo Custom Wheelchair, which I am still very happy and satisfied with because it has been the most robust chair for me so far." After all, a wheelchair has to put up with a lot of abuse in a skatepark. That’s why a certain degree of stability is just as important as the suspension system to ensure that not every landing directly impacts the athlete’s back. Other than that, Lebuser’s skating wheelchair strongly resembles a normal active wheelchair, which is why he often and gladly likes to use it in his everyday life as well. Having said that, his skating wheelchair is much heavier and bulkier than his everyday wheelchair.

In professional sports, small details can have a big impact on your performance. "I didn’t want to believe it at first, but truly everything can make a big difference," admits Lebuser. "Weight, seat settings, wheelchair dimensions, wheelbase - and you can’t easily say that one is better or worse than the other. Unfortunately, you have to try things and find out for yourself. However, that’s something you can easily check out by trying different chairs and settings. The ICON Wheelchairs Company makes chairs with numerous fully adjustable parameters. It’s a great way to test and find out which setting is the right one for you." 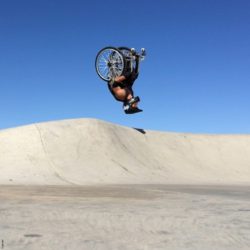 Aaron Fotheringham landed his first Back Flip in a wheelchair at the age of 14. Meanwhile he has mastered many other tricks such as the Double Back Flip or the Front Flip.

The US-American WCMX professional athlete Aaron Fotheringham also agrees that a wheelchair greatly impacts one’s skating performance. His current WCMX wheelchair is made by Box Wheelchairs. "We always try to make them as lightweight as possible without sacrificing strength. They are made with aluminum and Mike Box is always working to make them better. Every chair that Mike builds is better than the last and he is always looking to progress the design!"

Fotheringham remembers destroying quite a few wheelchairs since he started riding back in 2000. "The first wheelchair I ever dropped into a skatepark was an OttoBock but after 9 months of skateparks, it was completely ruined. Then I met Mike and John Box at Colours Wheelchairs. They were kind enough to keep building me stronger and stronger chairs when they would break." Mike Box had been building Fotheringham's chairs since he was nine years old. When Box founded his own company (Box Wheelchairs) a few years ago, he continued to help Fotheringham and progressed the WCMX sport with him.

Fotheringham's chair is currently equipped with two Fox Shocks to absorb some of the hard impacts. It also has extra cross bracing to keep the frame from bending. The front casters also have a spring to help absorb impacts as well. "In addition, I use Bones skateboard wheels in the front for more speed and Spinergy wheels for the rear because they're light but very strong!"

Just like Lebuser, Fotheringham appreciates that the WXMX chairs can "literally do the job of two wheelchairs. It is great for leisure and everyday use, as well as riding the skateparks. The suspension makes everyday use a bit smoother, which is very important for the parks."

Like all athletes, Fotheringham continues to develop his craft and improve his skills. He hopes to land a double front flip soon. Nevertheless, his main goal is to ensure that the sport of WCMX continues to grow. He hopes that even more children and adults around the world will conquer the skateparks in their wheelchairs. "One day it would be cool to see WCMX in the Paralympics or even X Games!"

Read more editorials in Topic of the Month's July here:

Click here for the article about adaptive sports equipment

Click here for the article about adaptive equipment in winter sports