Navigation systems are not a new invention. But what if an app for accessible destinations could be connected straight to your vehicle, thus making mobility easier for people with disabilities? The creative, innovative minds of Daimler AG’s Lab1886 challenged themselves to make it reality. That marked the birth of WheelPilot. 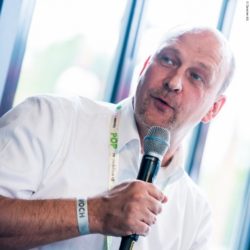 Matthias Heil is the Ex-Factory Driving Aids and WheelPilot App project manager at Lab1886. REHACARE.com talked to him about the app and its potential and asked about Daimler's understanding of inclusion.

Mr. Heil, how did you and your team come up with the idea to develop the WheelPilot app?

Matthias Heil: The global trend towards urbanization necessitates new mobility solutions. For more than ten years, Lab1886 has been Daimler AG’s innovation hub, tasked with developing and actualizing new business models that fall outside our core business areas as an automobile manufacturer. The Lab has created innovative mobility solutions such as car2go (soon to become Share Now), the first car subscription service - Mercedes Me Flexperience - or Ex-Factory Driving Aids, which pertains to vehicle conversions ex-factory for people with disabilities.

Lab1886 has the freedom and the drive to think and go beyond our core business. Building upon and inspired by the pioneering spirit of the company founders Gottlieb Daimler and Carl Benz, the idea is to quickly and progressively implement promising ideas of individual employees, teams and business units. Lab1886 studies future trends and explores technological, social and cultural developments.

My work at Daimler has introduced me to the wheelmap.org initiative that was developed by the German nonprofit organization Sozialhelden e.V. and Raul Krauthausen back in 2012. WheelPilot uses wheelmap.org’s data. I was very impressed by the idea of an app that shows wheelchair-accessible destinations and can be directly connected to the navigation system in our vehicles. That’s why Lab1886 decided to expand on the idea.

What is the project status?

Heil: Lab1886 collaborated with the Sozialhelden and was able to implement the first pilot, a test app, within a short three months.

Right now, we are still in the final programming stage of the app but are about to enter an internal test phase. It goes without saying that we hold the app to the same high quality standards as our vehicles and aspire to create an excellent customer experience.

That’s why the WheelPilot app is not yet ready for public release because it still has to undergo several internal tests. At the later market launch, the app will be available for Android and Apple smartphones at app stores.

Together with Verena Barwitz from Daimler AG and Holger Dieterich from Sozialhelden e.V., Matthias Heil presented the idea of the WheelPilot app at re:publica 2018. The title of the discussion was: "Guide through the barrier jungle? WheelPilot!".

What does the future hold for WheelPilot?

Heil: We have some promising ideas on how to integrate more useful information into the app. This includes the display of available accessible parking spots in parking garages near the target destinations or a list of nearby points of interest for people with mobility impairments, such as shops offering wheelchair-related products and services for example. We are also closely collaborating with the Sozialhelden to improve data quality and to explore other useful aspects and facets.

How much were people with disabilities involved in the implementation?

Heil: As has been the case with our Ex-Factory Driving Aids endeavor, we explicitly include people who use wheelchairs in our processes. This starts with brainstorming sessions and leads to a concrete test where we also include colleagues who use wheelchairs. Their feedback is very important to us and simply invaluable.

Why should people with disabilities use this app once it is on the market?

Heil: It’s difficult for someone who does not use a wheelchair to understand how frustrating it can be to make a dinner reservation, only to find out that several steps in the entrance prevent you from enjoying it. This is where we come in: If a person already drives a Mercedes-Benz, things get even easier if the app sends the destination address and directions straight to the car to guide the driver.

In what way is the app a logical progression of Daimler's stance on inclusion and self-determined mobility?

Heil: At Daimler, we consider diversity, inclusion and the urge to make mobility accessible for all core values. This is reflected in our diversity activities within our company to benefit both our employees and our valued customers. Our Ex-Factory Driving Aids unit for passenger cars and vans offers technical solutions that empower people with disabilities to control their own vehicle. After all, isn’t self-determined mobility the ultimate form of real participation? In the age of digitization and smartphones, it is only logical for us to offer more helpful and beneficial services in the form of an app.

Click here for the article about the VW Bulli bus