Gaming accessibility: on the road to the future of accessible games

Every year in August, Cologne becomes the gaming capital of the world. Last year marked the tenth time, the Rhine metropolis hosted the gamescom trade fair. The event aptly chose "Diversity Wins"  as its guiding theme since the industry is not only going through a period of rapid growth, but its target market also becomes more diverse. Melanie Eilert wants to make sure that the interests of people with disabilities are represented in this setting. Cologne is just the right city to promote increased accessibility in games. Tomorrow’s video game designers can learn this at the CologneGameLab of the Technical University of Cologne (TH Köln) for example. That’s why it’s the perfect place to raise the new talent’s awareness about this issue. 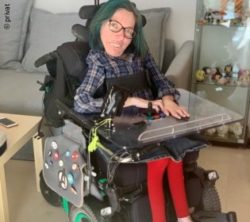 Melanie Eilert would like to become even more involved with the topic of inclusion in the games industry. She took the first step with her guest lecture to students of the TH Cologne.

The expert who made the Rhineland her home spoke with REHACARE.com about her guest lecture in front of the students, talked about the visibility of people with disabilities in gaming and explained why games may very well play an important role in inclusion.

Ms. Eilert, a few weeks ago you gave a lecture on "Gaming accessibility and disability representation in media/games" in front of students in Cologne. How did this opportunity arise?

Melanie Eilert: I happened to see an event announcement in the fall that indicated that "Digital Games" is a study program at the Technical University of Cologne/CologneGameLab. I thought to myself, "if future game designers are being educated right on my doorstep, they should be made aware of the issues of gamers with disabilities." So I contacted the administrators at the university to inquire if they would be interested in me discussing this with the students. That gave way to an official guest speaker invitation.

What is your take on the representation of people with disabilities and gaming accessibility?

Eilert: As is the case with other media formats, I believe the gaming sector still has a lot to learn when it comes to diversity. Having said that, underrepresented groups are getting more visibility, especially women in gaming or gamers with disabilities, for example. My lecture concluded that accessibility and representation still have a long way to go. However, accessibility has already made some great first strides.

Some users would like to see more commitment to accessibility from video game developers. Given that the number of gamers continues to experience steady growth and the fact that they are getting older sooner or later, why is accessibility not taken into consideration, especially when it comes to "mainstream" games?

Eilert: Unfortunately, I'm not well versed in game design and programming processes. I would like to have more knowledge and understanding about this to be able to express my wishes, needs, and criticisms to the designers in a more substantiated manner. But I think lack of accessibility is rooted in a lack of awareness about potential barriers. That’s why it is vitally important to always give feedback. At this point, I am very adamant about it. If I am unable to play a game, I will detail my problems in an e-mail to the powers that be. So far, I have always received a thank you note, which usually states that my suggestions will be considered "in the future".

What chances do games offer people with disabilities in the virtual world that are thwarted in real life?

Eilert: Games are unquestionably a massive part of pop culture. Unlike concert or theater visits that might be impossible with a disability, with the right equipment, you can even play games in a bed. It's a great way to meet and make friends and do things together - even if you are unable to leave the house or – at the very least – you don’t have to wonder whether a location is accessible.

The same way the movie sector needs more roles for actors with disabilities, I can’t think offhand of many video game characters that portray people with disabilities or that can serve as role models. If you could storyboard a game, which character would you like to control in a game?

Eilert: Characters with disabilities are virtually non-existent in games and if there are any, they are typically very poorly portrayed - without the will to live and suffering or they are depicted as evil antagonists and villains. Disabled characters are not even featured as extras on a busy street or similar settings. If someone wants to create a character with a disability for their game, it's important to me that this character is not part of the game because of his/her disability. The story of the game should also not boil down to healing or otherwise getting rid of said disability. It should simply be a character like all the others in the game.

A lot has changed since games looked like this. Only in terms of accessibility is there still room for improvement. And when it comes to storytelling, people like Melanie Eilert also want more diversity.

In recent years, have there been great examples for raising awareness of inclusion?

Eilert: Just today I saw that the eSports team of VfB Stuttgart has a young man in a wheelchair under contract (Niklas "nik-lugi" Luginsland, editor's note). I am sure that VfB or eSports fans are able to get a general idea about inclusion and increase their awareness thanks to the visibility of gamers with disabilities.

Are there current trends in the industry that indicate a movement towards more inclusion or do you see negative tendencies?

Eilert: Absolutely, and I see a little bit of both. I get the feeling that more and more games include options that make it possible to customize the game to meet your needs. The Xbox Adaptive Controller by Microsoft certainly got the ball rolling in this respect. I learned from the designers and students I have met that they definitely want to be as inclusive as possible. Having said that, I'm concerned about the rising trend towards virtual and augmented reality. This adds more barriers to the already existing ones in this setting. That’s why I urge stakeholders to work on removing barriers while the technology is still in its infancy. After all, if you build a new house, it makes more sense to install an elevator right away versus trying to retrofit it years after the building has been completed.

What are your future plans as it pertains to gaming accessibility?

Eilert: I definitely want to be more present and active and be a strong advocate of inclusion in gaming. I have taken the first steps with my articles for the gamescom trade fair and GamePro, as well as my lecture at the Technical University of Cologne/CologneGameLab. Now I plan to boldly continue to pursue this goal and forge success relationships to make it happen.