Braille was invented nearly 195 years ago. The system has helped people to effectively participate at home and in society and acquire higher education ever since. It remains a reliable system that facilitates inclusion today. However, when it comes to Braille reader advancements, current technology is not nearly as up to date. Two projects plan to change that. REHACARE.com sat down with the project leaders and asked how they intend to revolutionize the Braille reader to remove barriers to active participation in the future.

In this day and age, people can compensate for a loss of vision with an improved sense of hearing. Speech technologies and audio solutions have continuously improved in recent years, prompting more people to use their smartphone rather than a Braille reader when they are faced with a text. This is also due to the fact that technological stagnation has caused the displays to become nearly obsolete and simply impractical in everyday life. This circumstance has also meant that fewer blind people learn and use Braille.

But even though we have become a technology-driven society, access to education is still primarily gained through written language. Braille remains an essential tool for blind people that aids in living a self-determined life, just as it was nearly 200 years ago when Louis Braille, a French educator invented the alphabet system for the blind.

Braille is still critical to promote self-determination in 2019

"Learning to read and write Braille is as important for blind children as learning to read print is for sighted children," says Liam Smyth. He is Head of Marketing and Publicity at Bristol Braille Technology, a company based in the UK. The developer team of the social enterprise aims to halt the decline in Braille literacy because having a firm grasp on sentence structure, spelling, grammar, as well as other reading and writing skills is crucial in every profession: "Research shows us that blind adults who read Braille are around twice as likely to be employed than those who do not. Therefore, we believe that Braille is crucially important for students who cannot access print materials."

The company’s solution: A multiline electronic Braille e-reader - the Canute 360. Depending on the model and price, currently available conventional braille displays are only able to display a line of text between 12 and 80 characters. The Canute 360 shows nine lines of Braille, each comprised of 40 characters to form a 360-character display per page. The benefits of a multiline Braille e-reader are obvious. Users are able to better understand and read texts, notations, math equations, computer code or graphics, as well as mundane bank statements. "A blind colleague of ours has described reading a novel through a single line Braille display as like a sighted person trying to read through a calculator screen - possible, but often not a particularly enjoyable experience," says Smyth.

The Bristol Braille Technology team worked closely with a collective of Braille enthusiasts to develop the Canute 360.

The team collaborated closely with the Braillists, a grass-roots group of braille enthusiasts. Yet the developer team also welcomed any type of feedback from the community: "As a team of (largely) sighted engineers, we have relied extensively on this input in designing Canute 360. The user interface, for example, was designed by blind people. The feel of the Braille dots, the layout of the controls and the core functionality of Canute 360 was also all informed by blind and partially sighted people working with the engineering team." The close collaboration paid off. "Since we started demonstrating our initial production Canute 360 units earlier in 2019 the reaction of the community has been positive: as Canute 360 is the world’s first multi-line Braille reader, most users have never felt anything similar. Users have been particularly impressed by the potential for showing tables and musical notation in electronic format (which has never before been possible), and by the feel of the Braille dots," says Smyth. "The dots on Canute 360 are harder and more defined than paper Braille dots (similar to Braille signage in terms of feel), which makes Canute 360 easier to read for beginners, young children, and users with reduced finger sensitivity."

From award-winning prototype to first product line for early adopters

In 2017, the British company won the German eBook Award, a special prize for accessibility with its first prototype. At this point, the Canute 360 is ready for serial production and the first product line has been making its way to customers around the world since October. However, this is not the end of development as far as Smyth is concerned. Even though the small Bristol Braille Technology team focuses on the first product line of the Canute 360 for the time being, the company plans to keep refining and improving the system’s design in the future. "We’re excited, for example, about the possibility of adding screen-reader support in future, which would mean a computer programme could send text on screen in Braille to Canute 360 to be read."

The first Braille e-readers retailed for 1,695 British pounds, about 1,899 euros. While this doesn’t necessarily make the Canute 360 a bargain, it is simply the price early adopters pay to be among the first users of the system. The Company hopes to be able to lower the price in the future to make the Canute 360 an affordable alternative for students. 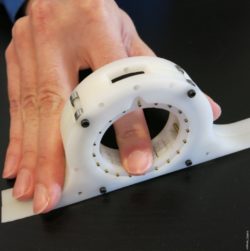 The BrailleRing combines the benefits of both larger and portable conventional Braille displays by putting the conventionally flat line of text displayed on the inside of a ring. It is thus possible to display long lines of Braille text with a small and portable device.

The BrailleRing by ARGE Tetragon is designed to display text lines of any length. This is "a mobile and flexible display that blind people can connect to smartphone or computers to read the contents of these devices in Braille," explains project leader Michael Treml. Mobile and flexible? Blind people wouldn’t necessarily use these terms to describe currently available Braille displays.

As aforementioned, traditional Braille displays can display a maximum of 80 characters in a line. But these models are very expensive. More affordable devices can display only twelve characters, thus very short lines of text. The Austrian developers solve this problem by using an innovative new shape, namely "by putting the conventionally flat line of text on the inside of a rotating ring, thus requiring only a small number of Braille modules. The reader will slide the entire device along a horizontal line thus causing the ring to rotate. While the reading finger rests at the bottom of the device, the rotating ring produces the familiar sliding movement of Braille characters across the fingertip. Display elements passing through the upper half of the ring are mechanically set to show new text." The shape also ensures resistance to external environmental influences like dust and humidity. What’s more, this entails fewer stationary actuators (components that convert electrical signals into mechanical energy) than traditional Braille displays, which greatly reduces manufacturing complexity and keeps costs low in the future, making the Braille ring cost-effective and portable.

The innovative idea that Treml created in his master’s thesis at the Vienna University of Technology (TU Wien) is still in the prototyping stage. The project currently has the status of a project sponsored by the FFG (spin-off fellowship), that is to say, staged somewhere between a patented concept and a device that’s ready for serial production. "Our sponsored project at the Vienna University of Technology is currently scheduled to end on February 2020, at which point we plan to have a functional prototype at actual size. As a minimum viable product, it could essentially be built in a small batch series. However, it will still be too early for market entry at that time," Treml sums up the current state of product development.

Nevertheless, there is lots of interest in a mobile Braille reader. "The feedback so far has been very positive. We have learned that many people would like to use this type of device for mobile reading purposes, on the train for example. We found out that a self-cleaning option might turn out to be a strong unique selling proposition. Our concept plans to fully decouple the inside display elements from the electronic system and create a removable drum unit for easy cleaning and rinse off." During the development phase, the engineers worked closely with Austrian and international organizations and associations aiding the blind and visually impaired to receive continuous feedback for the general concept. Even though the team doesn’t have a functional prototype at actual size that users can test at this stage, the long-term goal is to keep the cost for the Braille ring as low as the price tag of any commercially available smartphone.

As is always the case in research and development, ultimately not every developed product makes it to market. At the end of the day, demand determines price. Be that as it may, both projects - the Canute 360 and the BrailleRing – may perhaps help trigger a renaissance of the tactile writing system that Louis Braille invented in 1825. Right now, people whose blindness or visual loss occurs later in life tend to no longer learn Braille. Yet both blind and sighted people know that reading a book is better for memory and reading comprehension than simply listening to a book.