Ayasha Mack – That's how she rolls

Her love for literature is huge. This can be seen on Ayasha Mack's blog. And also in our HOW WE ROLL interview her love for words plays a big role, as well. Why it is still difficult for her to visit the Frankfurt Book Fair and what new position she would like to create in every city as the Federal Commissioner for the Disabled, she tells us at REHACARE.com. 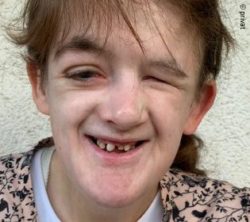 Ayasha Mack: I've always wanted to attend an event with an assistant. So far I haven't dared because I have to rely on someone I don't know in an unknown environment. (However, this year I took up this challenge at the Frankfurt Book Fair – at least for one day – and for a weekend in Munich).

Ayasha Mack: What influenced me most were the people who have already achieved something in a certain subject area that I also dream of. Currently, these are authors who have found their way to an agency and a publishing house with their novels, or who have made a name for themselves as self-publishers.

Ayasha Mack: There are two important official acts that both have priority for me:

I would also set up an office in each city that would be responsible for ensuring that public transport and the infrastructure of a city are accessible. Not only should people sit at their desks and argue for years about possible changes, but they should also be able to act immediately.

Wheelchair users for example could turn to this place if lifts (again) do not work, or blind people if the acoustic traffic light has failed once again.

Besides... Oh dear, I notice the list is getting long.

Ayasha Mack: I guess that depends on the subject. As far as literature is concerned, it is very important to me that there are generally more (unabridged) audio books available from conventional audio book publishers. These audiobooks are therefore accessible to all, because these titles can be purchased through the book trade. So there is no need to subscribe. Currently, many print titles either don't get an audio book, only a shortened audio book or an audio book that can only be listened to exclusively, i.e. by customers of a certain streaming service.

Ayasha Mack: ... an author, whereby I am currently working on the fact that the "would like to be once" becomes a "I am".

Ayasha Mack: Isn't the answer, whatever the question, always 42? At least that's what the author Douglas Adams writes in his novel "Hitchhiker's Guide To The Galaxy".