Benjamin Schmidt – That's how he rolls

His books are ruthlessly open, full of disarming truths and with powerful images. But the author, musician and graphic artist Benjamin Schmidt has not had enough. He would like to publish another book and even recordings for a record are still on his to-do list. Who his muses and companions were, why he would like to swim with an octopus and where he took off his glasses, he tells us at REHACARE.com. 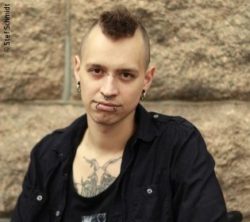 Benjamin Schmidt: So much! Sometimes my daughter, friends, sometimes a book by Terry Pratchett or Danish comedies. Life itself is often a funny thing, I think I have laughed a lot in my life.

Benjamin Schmidt: It's actually always logistical or financial hurdles – or both – that keep me from something, not the fear of it. I just want to publish a new book soon, start recording a record and a trip to Norway would be nice. Nothing that should intimidate you...

Benjamin Schmidt: Phew... I think friends and family members are the biggest influences here as well. I move in a very creative environment and also far away from it I find impressive qualities in different people in different ways.
Good – but I would also say that especially authors and musicians had a considerable influence on me. Henry Miller, Knut Hamsun, Rilke, but also Herrndorf and Lovecraft and Poe of course, just to name a few. In the music they were Joy Division, The Doors and much from the gothic corner. Dark, weird stuff.

Benjamin Schmidt: I'm afraid I don't know enough about that. "Political" decisions and their feasibility often depend on many other factors than the mere wish or ideal. And for the sake of reason, many things simply have to be examined individually.
But I think it would be nice if the cultural places and living spaces were generally accessible. An impeccable infrastructure would have to be available everywhere. And you shouldn't need a disabled person's representative at all, because it should simply be taken for granted that many different people with different needs can live together on an equal footing. Disabled people must not be a fringe group that has to be approached first. That is why I would also support art and cultural events and associations that have set themselves the task of educating and creatively working in this direction.

Benjamin Schmidt: ...dive with an octopus. I like these animals very much.  That would be really, really great - hihi.

Benjamin Schmidt: Where did I put my damn glasses down again?

Benjamin Schmidt: Ah, here they are!