Discover the world with music

Cassandra Mae Spittmann discovered the world of rhythm at the age of two. While she started out playing the tabla (Indian drums; editor's note) with her feet, the 19-year-old now elicits the notes with her hands. She has remained true to her preference for Indian music. With her voice and her songs, however, she is reaching an ever-growing audience worldwide. At REHACARE.com she tells us how she rolls otherwise. 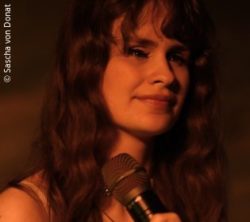 What makes a day a good day to you?

Cassandra Mae Spittmann: When I wake up with a good idea for the day.

Which auxiliary means or daily living aids are indispensable for you?

Cassandra Mae Spittmann: The white cane and Braille display together with the iPhone for daily communication.

What would you like to see from society and your fellow people in dealing with people with disabilities?

Cassandra Mae Spittmann: More thoughtfulness, but not in the sense of pity; better integration in larger groups; much more equal opportunities at school and at work, and a better understanding of problems blind people face in traffic.

Which assistive device would urgently need to be invented and/or improved?

Cassandra Mae Spittmann: Assistive devices should not be marketing concepts, like certain glasses that ultimately do not work as advertised and therefore cannot be used. Ultrasonic white canes should become standard, as should accessibility in all software. In my case, these are music programs, musical notation, et cetera that I use frequently.

What has been your biggest challenge so far that you have mastered – and what has helped you?

What can the assistive technology industry learn from the Corona pandemic to make life easier and/or better for people with disabilities in the future?

Cassandra Mae Spittmann: There should be many more accessible grocery shopping apps and more accessible streaming platforms. Apps like BeMyEyes and Clubhouse were helpful at the time. Aids to navigation should be further improved and may also be smaller.

If nothing would be impossible: Who would you like to meet one day and why?

Cassandra Mae Spittmann: Well-known Indian singers and musicians, such as Armaan Malik, to perform with them.

What was your best REHACARE experience?

Cassandra Mae Spittmann: Unfortunately, I have only been to SightCity so far. But I'll definitely make up for my visit to REHACARE.

Cassandra Mae Spittmann: It would be nice if assistive devices were more affordable without having to apply for them through the Health Insurance Fund, and if medical aids from the USA or other countries were also available more quickly in Germany.