Cindy Klink – That's how she rolls

"Hearing is overrated," is the title of her book. But Cindy Klink has made a name for herself above all with her YouTube channel, on which she translates songs into sign language. Why she thinks that hearing impaired or deaf people are still marginalized and what she would change as the Federal Commissioner for the Disabled, she tells us at REHACARE.com. 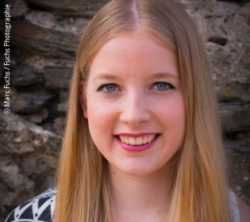 Cindy Klink: I could make a long list but mainly music, tv series, books, my own clumsiness and friends and family make me laugh.

Cindy Klink: My biggest dream so far is to be on stage with a very well-known musician or band and to interpret their songs in sign language. Maybe it'll work out someday because that would be very nice. And if not, then I would like to discover the world and get to know the various cultures.

Cindy Klink: My mom. She had always been the one who gave me the courage to go on, who showed me the world from another perspective and explained to me that the world is not there to give up, but to go on with raised heads, even if fate is against you. 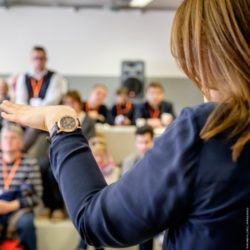 Cindy Klink interpretes songs into sign language on her YouTube channel. Her dream is to do this one day live on stage for a well-known artist/band.

Cindy Klink: There would be quite a few...

The first thing I would do is to make sure that every public building is accessible. Because more and more often I have to find out that especially small communities don't even have a ramp with which wheelchair users or even elderly people who can't walk well anymore can visit the town hall. This is a public institution – such a thing should be self-evident.

I would also do more to ensure that, even after an apprenticeship, continuing education is financed by the state. Because I have to state again and again that hearing impaired people often have to fight for their rights, because the state does not pay the interpreter costs, which is urgently necessary for further education (at university, job change et cetera). The mostly weak justification is always that one has an apprenticeship and that this is good enough. That is a pity.

In addition, I would also be involved in the assumption of costs in the area of social insurance. Some need aids, which they cannot cover because of the costs from their own financial resources. I often notice this with hearing aids. Every four to six years, new hearing aids are available to me and every hearing aid user, and the health insurance fund only covers the full cost of health insurance devices. If you want a better hearing aid because you can't hear very well with their hearing aids – as it is the case with me – the policyholder has to pay more than half of the costs himself/herself. And depending on what kind of hearing aid it is, it can cost a lot of money. In addition to these costs, battery costs et cetera have to be paid by himself/herself.

If, as an almost deaf person, I were now to say that I would like a cochlear implant (CI), the operation of which costs more than tens of thousands of euros, the health insurance company would pay for it in full. Not only the operation would be covered by the health insurance, but also all other things like the equipment of the CI and the batteries which have to be changed every one to three days. An operation is not unique, because a prosthesis cannot last a lifetime. The prosthesis must be replaced at least every ten to fifteen years. In my opinion, an operation is more expensive and riskier than a hearing aid. And I find it sad that this is being exploited in such a way nowadays.

There is still so much in this country that one would have to fight for. I could sit here and write forever.

Cindy Klink: Why is society so full of prejudices?

Cindy Klink: Thank you for the interview!