A fair and emancipated world for everyone – that is what Danny-Ralph Cäsar wishes for. In order to make this dream become reality, he is activiley involved in politics. His motto: Together many things are possible! Who has impressed and influenced him the most so far and what he has not dared to do yet, he tells us at RECAHARE.com. 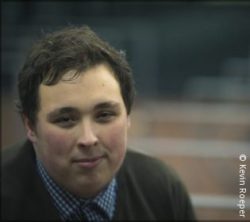 Danny-Ralph Cäsar: Yesterday, after a great trade fair, when I realized that unfortunately accessibility has still not been established everywhere.

Danny-Ralph Cäsar: I have always wanted to found my own company. But I think that in the end I, as an autistic person, prefer security instead.

Danny-Ralph Cäsar: There are some people who have influenced me in different aspects. My good friend Manuel Sarazzin who has always been motivating me fight for my cause in politics. Raul Krauthausen who is fighting for a fairer world for already years now. My good friend Donald Denzler who shows me again and again that also in the most difficult situation a ray of hope can be seen.

Danny-Ralph Cäsar: To be honest, I would fight for more jobs not being an honorary post. Also, this position needs a possibility to really influence something politically.

Danny-Ralph Cäsar: To this question, I really do not know a good answer. I think, I’m too humble to think that someone wants to make a movie about me. I prefer making good disability policy and take an active role in politics.

Danny-Ralph Cäsar: When will the idea of inclusion reach everyone?

Danny-Ralph Cäsar: Together many things are possible. Connect with each other and exchange views. Only this way we can move something here in Germany. More about my work as an activist at www.drcaesar.de (in German only).