Johannes Mairhofer – That's how he rolls

Johannes Mairhofer loves his professional freedom. As the initiator of www.spekabled.com he is on the road a lot. But when he's not trying to bring more diversity to German-speaking stages, he's not bored. The photographer, author, speaker and consultant is almost always busy. Why it was a fictitious character who gave him his freedom, he tells us at REHACARE.com. 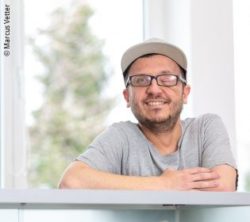 Johannes Mairhofer: In principle, I am relatively fearless and try out most of the things I want to try. However, with age comes a certain "need for security". Since I am active beside the versatile free professional activities also again and again honorary, or because I am implementing projects like speakabled.com, which brings no (financial) profit yet, I have a part-time job in Munich at present, which provides me a basic income and secures this versatility and/or makes possible.

Back to the initial question: I am currently looking for such a basic income in Hamburg. If something has changed here, nothing stands in the way of a move.

Johannes Mairhofer: Tyler Durden (character in Fight Club; editor's note). Despite literary exaggeration, he has an interesting view of the world and society. And I've often been influenced by it. Above all, he helped me to quit my secure job in 2010, amongst other things.

Johannes Mairhofer: Work for the unconditional basic income. For all.

As a speaker Johannes Mairhofer travels all around Germany – but not on horseback. But he also earns his living as a photographer and author. Partly at least, because the man from Munich is also on the road a lot in an honorary capacity.

Johannes Mairhofer: ...be a bird for a day.

Johannes Mairhofer: Why do people make phone calls in the subway instead of using text-based communication? This is particularly annoying when it comes to small talk.

Johannes Mairhofer: #lifehack: don't always take things so seriously. Neither yourself, nor the others. Helps immensely.