Philipp Schrenk – That's how he rolls

Philipp Schrenk was always the only student or employee with a disability, both at school and when he started his career. But it worked out. Today, Schrenk really loves to travel and to offer other people orientation to accessible holiday destinations with his travel blog. Why his weaker self has kept him away from the Caribbean so far and what question he has for the health insurance companies, he tells on REHACARE.com. 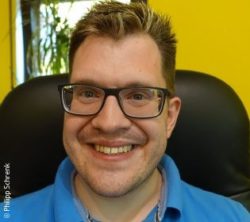 Philipp Schrenk: When something that I plan to do actually works out; a great joke (a dark sense of humor is OK and even jokes about disabilities!).

Philipp Schrenk: I would really like to go diving in the Caribbean and go paragliding in the mountains. However, since I tend to be more of a cautious person, my "inner demons" have so far not let me do it. But I will (once again) drown them out and stay the course.

Philipp Schrenk: I really don’t have one specific person. I am influenced by everyone I meet. Having said that, my parents, family, and friends definitely take the lion’s share here. They accept me as I am, with all my rough edges. It is also important that they are honest with me, even if I don’t like it at times.

You have the chance to become the Commissioner for the Disabled in your country. What would you do first?

Philipp Schrenk: I would ask our policy-makers to think outside the (German) box. This would reveal where inclusion works particularly well and (above all) how does it actually work and why? Instead of reinventing the wheel in Germany, we should consider the best practice examples from the Benelux Union, the Scandinavian countries and even the U.S. for example (think "The Americans with Disabilities Act"). Policy-makers could subsequently adopt these approaches in their entirety or partially or adapt them if needed without putting people with disabilities at a disadvantage. As the Federal Government Commissioner for Matters Relating to Persons with Disabilities, I would be in charge of monitoring and enforcing these aspects.

Philipp Schrenk not only runs the travel blog globewheeler.com, which he created after several years of development and concept phase in 2012. He also enjoys to travel himself.

Philipp Schrenk: As people with disabilities, we should ask ourselves from time to time what we ourselves can contribute to facilitating equal participation in everyday life. The much vaunted (and ad nauseam discussed) subject of inclusion is not just somebody else’s responsibility.

Philipp Schrenk: Dear health insurance providers, how much are you actually willing to pay for the quality of life? – I keep asking myself this very question every time I have to apply for disability benefits.

What else I wanted to say...

Philipp Schrenk: ...my favorite sayings: When you’re in the s**t up to your neck, there’s nothing left to do but sing (Samuel Beckett). And: Remember, if you need a helping hand, it’s at the end of your arm.