Silke Pan - That's how she rolls

Inclusive encounters between people with and without disabilities are near and dear to Silke Pan. That is why from her point of view inclusion should be taught and lived as early as possible. How she would like to bring peace to the world and why life in general is an unique opportunity, she tells us at REHACARE.com. 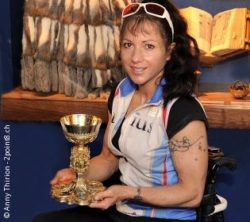 Silke Pan: It was at the Christmas market, where my husband played Santa Claus. A six-year-old boy scolded his mother because she lied to him when she told him that Santa Claus is not real. He said: "Look, here he is, the real Santa Claus!"

Silke Pan: For a long time I thought about playing the clown for ill children in the hospital – in order to give them a smile on their face again, to give them courage to live and to allow them to heal faster or to leave this life with peace in their hearts. The first steps have been taken in this direction, but for the sake of time, practical and financial reasons I have continued. I had to concentrate on more urgent matters in my life.

Silke Pan: I let myself be inspired again and again by different people. That can be people in everyday life or famous personalities, such as dancers, mountaineers or musicians. Artists influence me by their ability to transcend and portray emotions. Mountaineers or athletes affect me by their strong willpower, self-sufficiency and self-discipline. This characteristics can be helpful for any of us, no matter if you are a housewife, manager or performer.
I also like to be influenced by books about the different philosophies and world religions. This allows me a better understanding of their culture and environment.

Silke Pan: It would certainly be advantageous if the person itself who represents that position has a disability. I do not know the legal situation in Germany, but  for me it seems generally important to spread thoughts of inclusion as well as to provide public relations. so that people with a disability ultimately get the same opportunities as everyone else. One of my most important endeavors would be to teach children to deal with disability and disease. I think it would be appropriate to confront them at a young age with mental and physical disabilities and to teach them not to judge according to external appearance. They should be able to see that the impaired or ill person is essentially like them and just as valuable as all others. 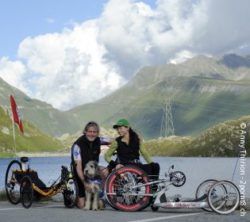 Silke Pan and her husband on the way; © Anny Thirion - 2point8.ch

Silke Pan: That is a difficult question! Fortunately I'm not a casting director! In order to decide this properly, I would have to go more often  to the cinema and the theater. The two actresses that come to my mind spontaneously are Charlotte Gainsbourg and Audrey Tautou.

Silke Pan: I wish to be able to turn sporadically into a great strong man or a similar impressive figure. So I could quickly get to places where mischief and violence prevail. I wish I could scare people off who would be determined to do a cruel act. I would like to make them stop doing things – not matter whether because of fear, respect or conscience. The main point is doing something and helping to make the world more peaceful.

Silke Pan: What does the term god actually mean?

Silke Pan: You don’t always get what you want. But you can learn to love your life the way it is. Life is a chance to create splendid things, we should take advantage of it. The instruments given to each person differ, but especially that point makes it thrilling.  By this, mankind becomes diverse, colorful and enriching.