Toni Furmanski – That's how she rolls

Role models in the media who are like her – that's what Toni Furmanski would have liked in her childhood and youth. This is also why she is so enthusiastic about the fact that more and more people with different disabilities appear in fashion and advertising. To what extent this would have helped her in as a teenager and why answering our questions made her shed some tears, she tells us on REHACARE.com. 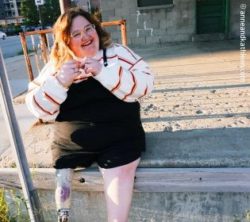 Toni Furmanski: Almost anything. I love a good pun.

Toni Furmanski: Growing up, my family would make a big deal about seeing another amputee out in about in the world. Not in a way to point them out, but in a way that helped me relate to someone else – to know I wasn’t alone. There weren’t people on television with prosthetics, and if there were, it was because they were an amputee. All I wanted in life is to see people like me, to hear stories like mine, to not feel so left out. Most of the amputees I saw were adults. I wanted to see people who were my age who I could relate to. I told myself, if I could ever be that for someone else, I would.

Toni Furmanski: My mom has been my rock my whole life. Everytime I get asked questions like this, I get choked up answering. As I type this, I am wiping away tears. She’s the greatest. Even during the hardest moments in my life – when I cried, or the rare moments I asked, "why me?" – when she could have cried with me, she never did. She stayed strong for me. "We will get through it," she’d say...and we always did.

Toni Furmanski: I would work on normalizing disabilities. One of the things that makes me so happy right now is representation in fashion and advertisements. There are a few companies who have started using people of all different ability levels in their marketing campaigns and I can’t even begin to tell you how much it warms my heart. My goal would be to get that to be the norm, not something that sets them apart from other companies. In my experience, if I could have seen people like me growing up, I would have felt valued, and seen, and probably wouldn’t have taken so long to feel proud of being an amputee. 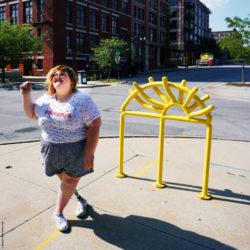 Toni Furmanski: My family and my friends.

I am who I am because I have people by my side and in my corner who accept me for my faults and accept my weirdness and my humor and my passions.

Toni Furmanski: the person I needed and wanted as a little girl for someone else.

Toni Furmanski: How can we be kinder and more compassionate and more understanding?

Toni Furmanski: Let’s just be kind humans. Kind to others and kind to ourselves.