Viola Steinbeck - That's how she rolls

If she had enough time and a companion, Viola Steinbeck would really love to travel across the USA. And although it is not possible at the moment, she holds on to this dream. Which question she would like to have an answer to and why her grandparents are her one and only, she tells us on REHACARE.com. 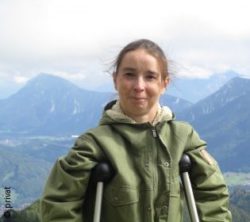 Viola Steinbeck: Specificly? No idea ... I can laugh very well about daily occurences. Also about myself. When I think about it again: recently about my mother.

Viola Steinbeck: Traveling cross-country through the USA for one or two years. But it is difficult to organize a companion – and also being away for such a long time. I’m working on the realization, if only mentally at the moment.

Viola Steinbeck: My grandparents, I think there is nothing more important than grandma and grandpa. I have spent a lot of time with them because my mother was studying, earning money and being a single mother, like many other women at this time. My mother has brought me to be a autonomous woman, despite and especially because of my disability. She did it because she always had to fight on many fronts at the same time. My stepfather has taught me to always illuminate a story from both sides, not to judge rashly and not to generalize. I also have my hunger for knowledge from him.

Viola Steinbeck and her boyfriend are a couple for already 17 years now; © private

Viola Steinbeck: Raising awareness about what it means to have a disability and how barriers in everyday life affect people and what you can and should do about it.

Viola Steinbeck: Depends on the implementation ... No idea.

Viola Steinbeck: a millionaire. Then I can transform my dream with the journey and probably create a new one.

Viola Steinbeck: Why do people think that they are better than others or the crown of creation?

Viola Steinbeck: Live long and prosper. Take everything what is possible.