For nearly 20 years, the "Fanclub Sehhunde; Fußball-Fanclub für Blinde und Sehbehinderte e.V." (English: Soccer Fan Club for Blind and Visually Impaired Persons) promotes match reporting for the blind to ensure that its members fully experience a stadium visit and the game. At this point, all clubs in Germany’s 1. Bundesliga facilitate match reports for their fans with visual impairments. Yet despite all that, there are still numerous issues surrounding the stadium visits. 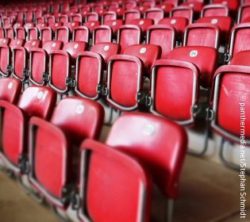 To get to the soccer stadium is not easy for blind or visually impaired persons. And the problems start with purchasing tickets; © Panthermedia.net/Stephan Schmidt

REHACARE.com spoke with deputy chairperson Nina Schweppe about the "Sehhunde" match reporting for the blind and the obstacles that still need to be overcome before full inclusion in stadiums becomes a reality.

Ms. Schweppe, how has match reporting for the blind changed over the past few years?

Nina Schweppe: In 1999, when Leverkusen first wanted to set up seats with match reporting for the blind, the challenge for all of us was that there was no way to broadcast a 90-minute report to visitor’s headphones. What’s more, it became obvious even then that all radio coverage et cetera is created for people, who are outside of the stadium. That’s why we made a virtue out of necessity and created a special coverage version. It was and is designed to focus on everything that happens to the ball. Its primary goal is not to entertain the listeners but to reflect what’s actually happening on the field in exactly the same way spectators see the game in the stadium.

We deliberated who would be suitable for this task because they are already used to explaining soccer to people. We decided to use youth soccer coaches. This has proven successful in Leverkusen for quite some time now. These days, there is a large variety of reporters for the blind. They range from coaches, amateur soccer players all the way to journalists.

To maintain and keep a certain standard, in 2007, the "Fanclub Sehhunde" created the nationwide reporter seminar, which today continues as the "Blindenreportage (match reporting for the blind) Expert Forum".

How much does it take to convince smaller and financially weaker clubs in levels below the first and second division to also provide seats for persons with visual impairments and to ensure match reporting for the blind?

Schweppe: Even though more and more clubs in the lower divisions offer match reporting for the blind, there are still many that have a hard time with this. What’s more, unlike designated wheelchair accessible seating areas, these services are not mandatory measures.

A great help in this case is the AWO Kompetenzzentrum Blindenreportage im Sport (English: National Workers Welfare Association Competence Center for Media Coverage of Sports for the Blind), which along with the DFB (German Football Association) and the DFL (German Football League) makes it possible for clubs to utilize this collaboration and obtain the necessary technical equipment from a vendor, who already equipped several stadiums at a manageable cost. The willingness to provide this type of accommodation varies greatly. While some primarily worry as to who will finance this technology, other clubs still believe that they don’t have any fans with visual impairments in their respective stadiums.

Just because they are unable to "see", does not mean that blind or visual impaired people are not willing to experience a soccer game in the stadium. With the match reporting for the blind they are able to hear everything what is happening on the field; © panthermedia.net/mikdam

How have perceptions about people with disabilities and your project changed in the stadium?

Schweppe: Inclusion means comprehensive participation without unnecessary barriers. When most clubs today sell or only let you order their tickets at a specific time, which is typically communicated on mostly non-accessible websites and often requires the completion of a PDF form that blind people are not able to fill in without outside help before they can actually purchase a ticket for the blind, it completely misses the point of inclusion. And when clubs subsequently argue that this can be effortlessly done by sighted helpers since –after all- a blind person also needs a chaperone when he/she actually visits the stadium, it also violates my idea of inclusion.

I want to be able to order my blind ticket without the help of sighted people. I want to pay a fair price for my ticket that also includes my chaperone and I want to enjoy my visit and listen to the match coverage without interruptions and great sound quality. It is imperative that I am not being confronted with technical equipment that uses keys without locator dots et cetera and is thus easy to misalign to where I am subsequently not able to follow a large portion of the match.

I think it’s unrealistic to provide tactile guiding systems by ÖPNV (a portal serving people living with mobility restrictions) to get to the stadium and move around the stadium and to expect blind persons to independently manage their visit. This might work in individual cases, but most blind and visually impaired people are likely not able to move around in large crowds with their auxiliary equipment. This is the wrong concept of inclusion.

For me, inclusion means everything I just mentioned. Conversely, people who want to be included also need to contribute their own share to make this happen. Many people believe inclusion means to design the world in an inclusive fashion and all they have to do is participate without any limitations. However, both sides have to engage in the inclusive process.