"Computer and video games are a social and inclusive medium"

Countless Let’s Play videos on YouTube show that gaming has become an integral part of society. Whether people use consoles, PCs, laptops, smartphones or tablets, you can play on almost any platform. But what about accessibility in the age of better and better graphics and increasingly interactive game design? 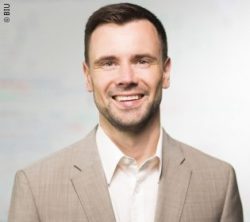 Felix Falk is the managing director of the German Association of Interactive Entertainment Software (BIU-Bundesverband Interaktiver Unterhaltungssoftware) and just the right contact person when it comes to the game industry – the BIU is the organizer of gamescom. REHACARE.com asked Falk about the trends in the industry as it pertains to accessibility and inquired how games are also playing an increasingly important role in medicine.

Mr. Falk, developers are increasingly collaborating with stakeholders. For example, the controls for "Uncharted 4" were adapted to accommodate people with physical disabilities. And although we still have a long way to go before everyone is able to play without any restrictions on their console, PC or tablet, what progress has the video game industry made over the past few years when it comes to including people with disabilities – as it relates to accessibility, storytelling or advancing the social discourse?

Felix Falk: A lot of things have happened in this area over the past few years. For example, the current games consoles feature a multitude of options for a simplified use, such as screen magnifiers, larger texts, more contrasts, inverted colors, speech output of screen text and context information. These are integrated features that already come standard in many cases.

What’s more, there are now games where disability plays a major role, for example in "Life is strange". Without giving too much away, the beginning of the fourth Episode dares to take a truly great and differentiated view on this subject matter. "Final Fantasy 7" features a character named Barret Wallace, the leader of a resistance group, who is amputated below the right elbow; in "Overwatch", the character of Junkrat lost his right lower leg. In addition, Microsoft has announced its plans to offer wheelchair avatars for Xbox. The Microsoft Inclusive Technologies Lab also works on many different features specifically designed for gamers with disabilities. All these examples show that there is an ever-increasing diversity in the game area as it pertains to disabilities.

In 2016 Sebastian (Sep) Lenßen of the gamer collective PietSmiet and Dennis Winkens played against each other in the course of the gamescom. This year the revenge took place and this time the professional Sep won the race.

How can a trade fair like gamescom help to draw the attention of more developers to the target group of people with disabilities and to launch games that can be played by everyone?

Falk: Computer and video games are a social and inclusive medium. They bring people of all ages and backgrounds together. Games make it possible to overcome limitations, immerse in fantastic worlds together and share adventures with others. That’s what makes gamescom such an experience.

The gamescom trade fair is the world’s biggest event for computer and video games. Not only does it showcase the latest games and trends, it also serves as a meeting point for a diverse group of people who come together to share their fascination with games, to play together and experience the game culture in all of its glory. The gamescom trade fair is open to all game fans and it is also accessible. This makes it possible for every gamer, with or without disabilities, to participate in the event. We want to take a stand together with partners like the Aktion Mensch (a German nationwide social lottery that provides support for non-profit organizations working in the field of disability, as well as more generally supporting inclusion in society). We also facilitate communication between gamers with disabilities and companies. As was the case this year when Dennis Winkens, online editor, and face of the "Neue Nähe" Aktion Mensch campaign (English: New Closeness) was able to compare notes with a startup company for input devices for gamers with disabilities.

Will accessibility become even more important in the future because today’s gamer generation is also getting older plus the fact that older people ultimately also benefit from more accessibility?

Falk: Of course! The number of gamers in Germany keeps growing. By now, half of Germany’s population plays computer and video games. At the moment, the fastest growing target audience is people over 50. That’s why accessibility will also be an important issue in the future. What’s more, games can be utilized in another important field: namely medicine. Today, dementia prevention programs or therapeutic training can be supported by computer and video games. Senior citizens can use games to boost their mental and physical health. Respective pilot projects are already being implemented in senior citizen centers.

Falk: For me, inclusion means the equal treatment and, above all, the integration of people with disabilities. I did my community (civilian) service (called "Zivildienst" in German. It was the alternative option to military service until the suspension of conscription in 2011) in a home for mentally and physically challenged persons and experienced first-hand how a relationship marked by openness and mutual support can benefit everyone.