Literature should be accessible to all – including people who depend on texts written in Simple English. A project in Frankfurt, Germany, now wants to make this possible. REHACARE.com spoke with Hauke Hückstädt, the director of the Literaturhaus Frankfurt (English: House of Literature Frankfurt) about the "Frankfurt, deine Geschichte. Literatur in Einfacher Sprache" (English: Frankfurt. This is your story. Literature in Simple Language) project. 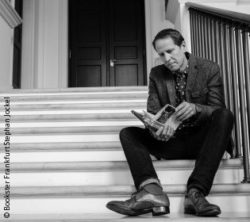 Mr. Hückstädt, what characteristics are required of a text that is written in simple language?

Hauke Hückstädt: There are rules and recommendations for the uniform implementation of Simple Language as suggested by the German Federal Ministry of Labor and Social Affairs for example. For our endeavor with writers, we wanted and had to somewhat let go and loosen the requirements applicable to official journals or a homepage for instance. The six authors we are now collaborating with met at the Literaturhaus Frankfurt. During a workshop, we jointly prepared rules the writers want to abide by in their texts pertaining to "Frankfurt, deine Geschichte. Literatur in Einfacher Sprache". This might sound like this: "Our texts deal with events, places, people or subjects in Frankfurt’s history." And adds, "We are also able to make up stories in these texts." However, "We use simple language." And, "We write simple sentences." Or, "We avoid leaps in time." All in all, our endeavor has resulted in eleven rules.

How did this project idea originate?

Hückstädt: The Hessian Ministry of Social Affairs and the Office of Inclusion of the City of Frankfurt approached us. Simply by broadly asking us whether Simple Language and Literature can be merged somehow. We quickly realized that this is a great unmet need. We knew there are hardly any texts by famous authors that are specifically written in Simple Language. We wanted to make this happen and get a jumpstart on this. This would truly be culture for everyone. After all, why should seven million people, who rely on Simple Language for many different reasons not be able to read the latest texts by Alissa Walser, Kristof Magnusson, Nora Bossong, Olga Grjasnowa, Mirko Bonné or Henning Ahrens? 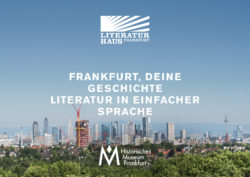 What other goals would you like to achieve in the future with this project?

Hückstädt: The response is already enormous. The goal of any House of Literature is to bring texts, language, books and people together. There is no commercial intent to our efforts. If we consistently do this and truly refer to everyone, we must not exclude the 22 million people, who have problems with reading according to official statements. Right now, we are in the beginning stages of this and will not stop. Texts will be translated into Simple Language, which is not our primary task. Plus more and more texts will also be written in Simple Language by famous authors. Simple language as an art form! We have made a start in this case.

Hückstädt: To exclude as few people as possible. It certainly does not mean to start a new sanctuary.