It is called the disease with a thousand faces: multiple sclerosis (MS) manifests itself very differently in different people. Many don’t like to talk about their illness and the subsequent restrictions it entails. REHACARE.com spoke with Jann Kessler, the director of the documentary film "Multiple Fates - About the Struggle with One’s Own Body" about his personal connection to MS. 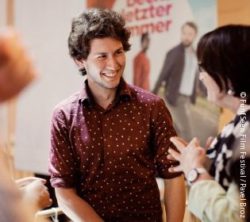 During his early childhood, Kessler’s mother fell ill with MS. For a long time, he blocked out the diagnosis but ultimately wanted to better understand the disease and its effects. He portrayed seven people and their stories in his film.

Mr. Kessler, you grew up with your mother’s disease. When did you come up with the idea to make a documentary film?

Jann Kessler: It was a long process because during my childhood, filmmaking was one of many hobbies I had that helped me in not being at home and in forgetting the difficulties that stemmed from my mom’s MS. I didn’t realize until I was about 16, how little I knew about her and her disease. Meanwhile, her MS had advanced to a point where she was no longer able to speak clearly. When I was 17, I subsequently started to search for other people who suffer from this disease to listen to them. Initially, bringing along my camera was just an excuse; it wasn’t until later when I really started to film.

Many people with multiple sclerosis don’t like to talk about their disease. Why do you think it’s important to confront the diagnosis and its impact?

Kessler: As a child, I saw how my mom was never able to talk about her disease. That’s why it was often impossible for me to understand her and her decisions. We subsequently all felt abandoned and alone because of it, and my mom possibly felt the same way. In the meantime, I was fortunate enough to meet many other people with MS who are very open about their disease. This is the only way the people around the affected person get the chance to support and join him/her on their journey of living with this disease. But sometimes this takes a lot of courage.

How did you meet the people you portray in the film?

Kessler: I met many of them through friends and acquaintances. It actually does not take long to find other people with MS. In addition, the Swiss Multiple Sclerosis Society called on people to contact me regarding the project. All in all, I met more than 40 people. It was important for me to show as many different forms of MS as possible, to feature people where you can’t tell right away that they have the disease as well those who are more strongly affected by it. There are also major differences in how people deal with this disease: some people are very involved and look into all of the potential effects of MS; others just want to live in the moment and not get too involved with MS. I have tried to listen and understand. Quite often, we also talked about all kinds of other things aside from MS and had a lot of fun together.

Kessler: It means a big chance: every person has limitations and problems he/she needs to come to terms with. I definitely don’t want to trivialize a chronic disease by saying this. But I want to point out that we all have many existential questions in common: is there any meaning in my life, what should I do with my life? What’s important when the pursuit of success and accomplishment is no longer possible? If we succeed as a society to give everyone a chance to participate in life, we will come to realize: supposedly healthy people can learn a great deal from those who live with a disease like MS.

More (only in German) about the film at: www.ms-derfilm.de